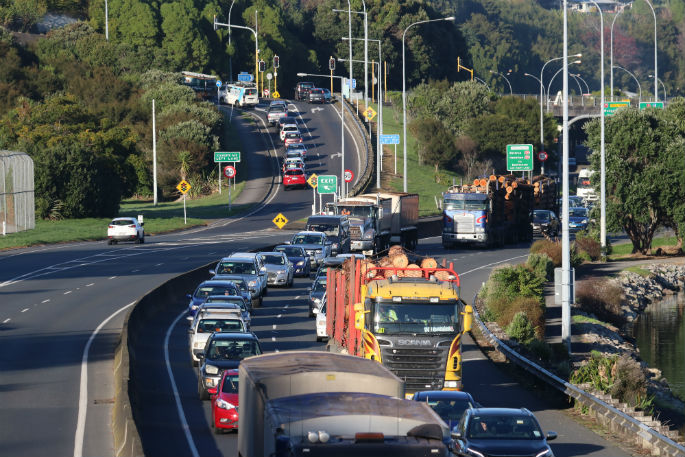 Would Steve Morris’s road toll on trucks unclutter our highways and byways at peak time?

A potentially controversial suggestion for a road toll for heavy vehicles to solve congestion during peak traffic hours has been raised by a Tauranga City councillor.

Cr Steve Morris says a toll on heavy vehicles entering Port of Tauranga from 7.30-9.30am and 4pm-6pm could bring immediate relief from the peak time gridlock on the city’s main thoroughfares. The suggestion comes on the back of Auckland Mayoral candidate John Tamihere’s similar idea for a congestion charge on trucks entering that city’s ports.

“The toll would enable Tauranga to fund more transport upgrades, benefitting the port, and reduce congestion at peak times,” says Steve. However he would expect opposition to his idea from the trucking industry.

“I think there is a better way. Incentivisation should be a low road user charge, not a higher toll. To me that would be a more beneficial way of doing it.”

He believes cargo trucks going to the port should be incentivised with the low charge to use the roads in off-peak hours.

“For some time I have been raising the issue that Hewlett’s Rd has a lot more capacity on it from 7pm through to 6am.”

Stuart understands port management is working on the issue and encouraging heavy transport users to use off-peak hours.

Port of Tauranga Communications Manager Rochelle Lockley told The Weekend Sun that they are introducing a vehicle booking system that will incentivise truck traffic outside of peak times.

“The idea is to make it much cheaper to deliver or pick up a container outside of peak hours.”

The system is being introduced over the next few weeks. Charges will start in the middle of June.

“I understand that bookings outside peak hours will be less than half the price of peak bookings.

“It is a system we have been operating successfully at our inland port in Auckland, Metroport for some time.

“It is used by lots of ports so we don’t envisage any problems,” says Rochelle.

Rubbish idea.... penalising firms for operating. Leverage the port, build dedicated HT lanes to the port. That will ease congestion.... if you want to toll something, toll bus use of the new lanes

Reduce the number of trucks on the ROAD!!! NO trucks deliver your food to the supermarket, they deliver goods to the Port, they pick up your rubbish !! Etc, Etc, Etc. Do you really think that trucking firms send trucks onto the road for a joyride ??? Add a toll and watch the price/cost of your groceries go up, the cost of you petrol, the cost of your rubbish collection. Cr Steve Morris is a total dreamer that wants the residents of Tauranga to PAY EVEN MORE to live in Tauranga

Traffic to the port

Fact: truck traffic to the port has not increased over the last three years all the port growth has been by rail. Report by Mark Cairns.

Look at the picture and see for yourself there is hardly any trucks in it lol. What seems to be clogging up the road is CARS. Maybe what is needed here is an idiot tax and we could charge all councillors this tax which sounds much fairer to me.....

Trucking Companies are already being made to pay every which way possible through RUC, higher toll road charges, higher registration charges and now you want them to pay again. You will complain when products aren’t delivered on time. Charge the car user during peak times instead. Maybe then they will catch a bus like you want them to.