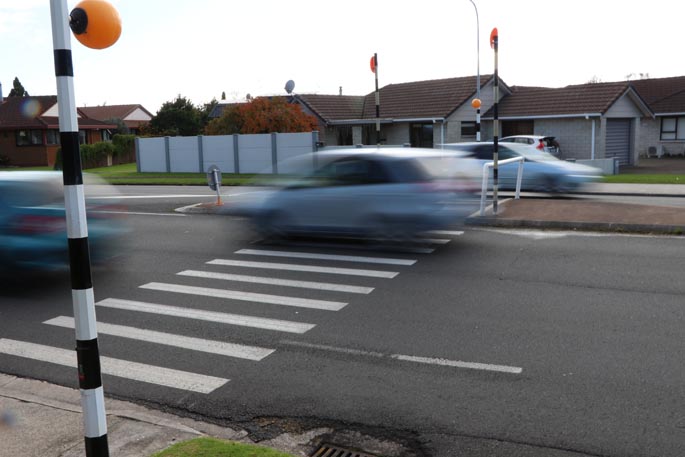 The pedestrian crossing where Jeff is hoping a speed camera will be put. Image: Daniel Hines.

A Tauranga man is on a mission to get a speed camera installed along Chapel Street.

Chapel Street resident, who only wants to be known as Jeff, has put a together a petition with more than 60 signatures in support.

Jeff imagines the speed camera to be put on Chapel Street, near Maxwells Road, near the pedestrian crossing.

“There has been too many near misses at this crossing.

“These two lane crossings can be very dangerous to small children going home from school.

“Cars will stop in the left lane for a child who will start to cross and the person in that car will have to toot and wave at the child to stop as a car in the outside lane will not stop.

“I have personally seen this happen more than once.”

Jeff hopes a speed camera will slow people, down as he witnesses motorists doing 80/90km instead of the posted 50km.

“A speed camera may help to slow these people down.”

Jeff says he will be putting the petition towards the Tauranga City Council.

“How much does a life cost?”

Totally support Tauranga City Council investing in a ’mobile speed camera’ that is capable of being used to issue infringements. As areas of speed are identified the camera should be able to be relocated and easily fixed an existing light standard. It would certainly pay for itself and enhance safety.

If you were to put a camera in place, then it should be highly visible so drivers do slow down... not hidden out of the way just to gather revenue (as everywhere in NZ). This has been proven in many countries that hidden cameras are just collecting money and not addressing the speeding issue at the time.

It is only natural that one’s speed increases over the causeway. When back in the built-up area we naturally slow down. Answer? Move the crossing toward Bureta, away from the corner.

The police around here have no interest in speeder’s. None. If you haven’t flipped your car on the main straight they won’t bat an eyelid. They actually need bikers on the force as during rush hour it is impossible to get anywhere in TGA as we all know due to the TCC being so out of touch. Speed camera’s are great for the council coffers. Not ideal for reducing speeding. Speed bumps are probably the only way forward. The 2 lane issue raised here is very valid. That pedestrian crossing mentioned is in the wrong place isn’t it. *slow clapping for the TCC*

So what else can you then propose ’First Responder’? don’t just complain and shoot down other suggestions. Provide useful suggestions like perhaps putting a series of speed humps in place on the road.

Never seen anyone stick to 50kph on Chapel Street, apart from me. More cameras needed everywhere. If they had 24hr CCTV monitoring this stretch they would have a field day with all the dangerous driving. People cutting others up, switching lanes, speeding, not stopping for the crossing. Fill your boots plod, hit them in the pocket. Kiwis will not learn.

Speed cameras are just revenue gathering, and don’t slow traffic down. What’s the point getting a letter in the mail, 2 weeks after you sped through a district? If they really were interested in slowing cars down, put a fully marked camera vehicle on the scene. Traffic will slow down, but unfortunately government misses out on money. Those that travel past fixed cameras regularly know they are there, and slow down only while they past it.