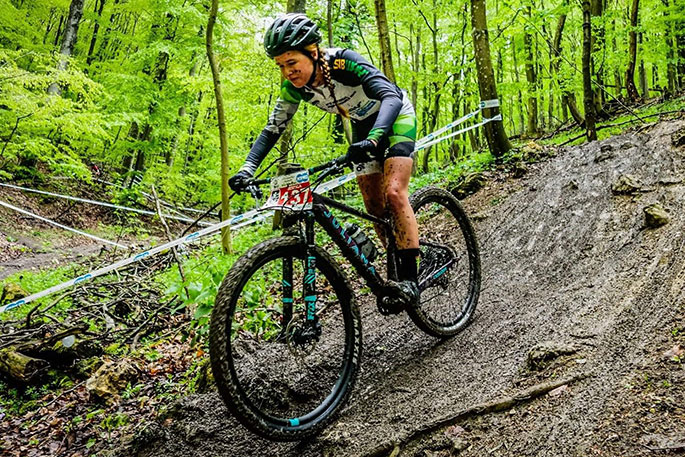 The event, held on Sunday, was the culmination of a long held dream for the 19-year-old to compete at the highest level after stepping up to under-23 level.

She went into the race ranked 56 out of 77 riders competing.

Starting from the back is always difficult and so it proved to be. In the first lap she had a hard fall which damaged her bike, making gear changes difficult and causing her chain to drop eighth times over the three laps.

While she finished outside her goal of making the top 30, her performance showed her determination to never give in and will certainly make her more competitive at the next world cup event this weekend.

Jessica is in Europe for five weeks with other members of the Mountain Bike National Performance Hub in first year elite rider Ben Oliver, under-19 rider Sammy Maxwell and coach Sam Thompson.

For Jessica stepping up to under-23 level has been a major transformation after she dominated the younger age groups with seven New Zealand and five Oceania cross country titles to her name.

“It has definitely a big leap. It is a whole other level especially doing World Cups this year. It has been a big change,” says Jessica.

“If you want to be in the elite riders at under-23 level you really have to step up the training. Under-19 is great but at this level you have to be more committed because at this point is a major part of your life.

“There are a whole lot more women involved at under-23 internationally and you have longer races as well.”

Jessica is from Auckland and moved to Rotorua late last year to work for Nduro Events. She loves being based near her favourite training trail of Tuhoto-Ariki.

The track is named after the respected and feared Tuhourangi tohunga (priest) who predicted the Mt Tarawera eruption.

“I grew up just riding on roots really and I love the mud and love the technical stuff,” says Jessica.

“Tuhoto-Ariki is super-techy. I love riding it when it is wet. You slip around and need to know how to control the bike really if you want to go through their fast in the wet. It is just super-fun.”

Not surprisingly the Olympics loom larger in Jessica’s future goals.

“A while ago I wanted to get to the 2020 Olympics but that is not realistic for the amount of selection places available so maybe 2024 Olympics. My other goal for the next few years is to gain positions at World Cup level and go to world champs.

“Hopefully I will get into the top 10 or even higher. Top five would be absolutely amazing.”

Jessica has been impressed by two talented 17-year-old Rotorua riders in Ruby Ryan and Tuhoto-Ariki Pene. Like Jessica they performed outstandingly well at the Oceania Mountain Bike Championships held in Australia last month.

“Tuhoto absolutely smashed it out there that’s for sure. He got the fastest time of the day at the Oceanias, beating all the men’s elite times. It was so cool to see that as you don’t really see a junior rider beat the elite men. He was so proud.

“And Ruby has done amazingly well. She used to have quite a few injuries but she has not had any recently which has been awesome. She has been gaining more and more experience and did some Junior World Championship races in California. She rocked it over there, getting some podiums.”