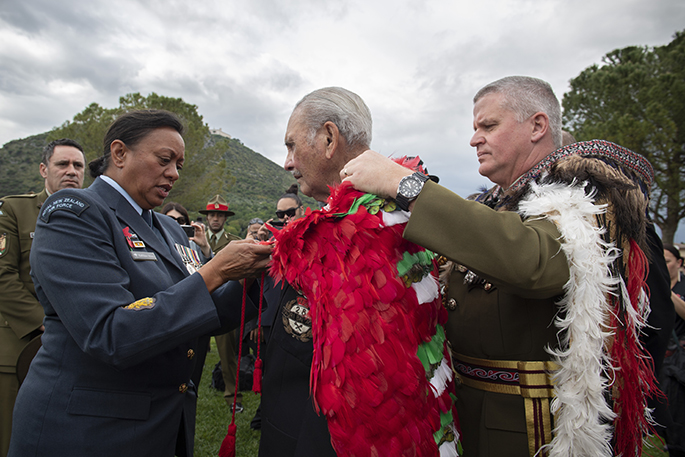 Chief of New Zealand Army Major General John Boswell, right, places the New Zealand Defence Force Ngā Tapuwae kahu huruhuru on the last surviving member of B Company, Robert Gillies, at the commemoration of the 75th anniversary of the Battles of Cassino

Rotorua man Robert Gillies stands at the railway station in the small Italian town of Cassino and remembers.

As the last remaining member of 28 (Māori) Battalion B Company, the 94-year-old remembers the comradeship, the loss and the fear of 75 years ago during the Battles of Cassino.

He was back in Cassino this week for commemorations of the battles and was presented with the magnificent New Zealand Defence Force Ngā Tapuwae kahu huruhuru [cloak].

The 28 (Māori) Battalion played a crucial part in the Battles of Cassino during the Second World War – it was the only New Zealand battalion able to cross the flooded Rapido River and start an assault on the town’s well-defended railway station.

Soldiers seized positions in and around it but were forced to withdraw when German troops counter-attacked. More than 150 of the 28 (Māori) Battalion soldiers were killed, wounded or captured in that battle alone.

“It was such a success on the first night but the poor engineers couldn’t get the last span across the Rapido,” says Robert.

“B Company took the station, and they stuck at it all day, beat back two counterattacks. They knew if it got to dark the Germans would bring their tanks out, and that’s what they did – they brought them out late afternoon.

“We couldn’t hold the station. We had to come back. If we’d have got our tanks across in support we would have taken Cassino.”

The Battles of Cassino, in which the 2nd New Zealand Division participated in February and March 1944, were among the most gruelling New Zealand troops participated in during the Second World War. The division suffered more than 1600 casualties, including 343 deaths. Soldiers said fighting through a maze of rubble, in appalling weather, was “absolute hell”.

Cassino fell in May 1944 to British and Polish troops, with support from New Zealand artillery.

Robert, who served for 4-1/2 years, was just a teenager when he went to Italy. The shrapnel in his arm is a lasting reminder of his time there, as are the memories of the good men and women he served with.

“It’s always there in your mind. It never leaves you,” says Robert.

Born in Hastings, Robert moved to Rotorua as a youngster, after the Napier earthquake, and it was from there he went to war.

He returned to Rotorua, where he met and married Rae Gillies in July 1948, and the couple had three sons.

Throughout the years he kept in touch with his mates from 28 (Māori) Battalion. When they disbanded seven years ago, 26 members remained. Now it’s just Robert from B Company and 97-year-old Masterton man Epineha Ratapu, who was in C Company.

“It’s pretty sad, the loss of life,” says Robert. “It’s good to pay my respects to those who didn’t come home.” 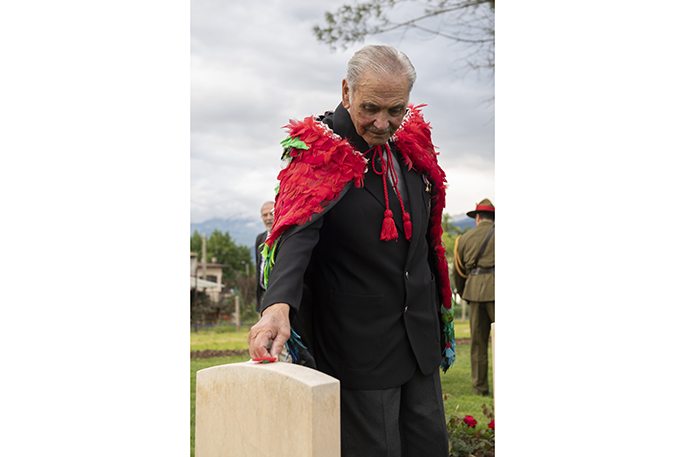 The last surviving member of B Company, Robert Gillies, places a poppy on the headstone of a soldier while at the commemoration of the 75th anniversary of the Battles of Cassino in Italy.