Happy as a pig in mud 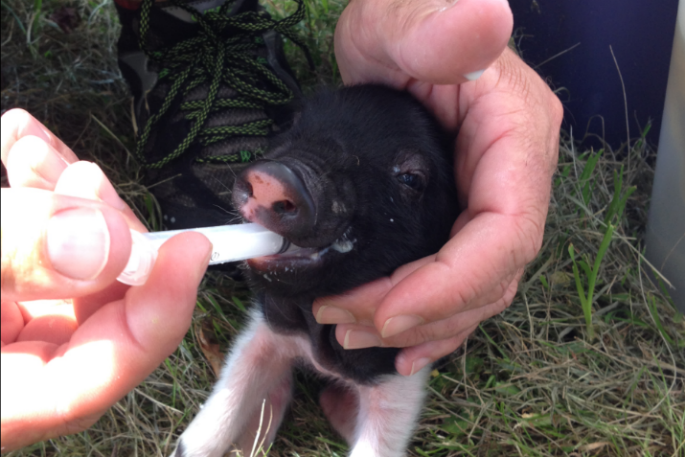 It’s hard to figure where the farmyard stops and the farmhouse starts.

That’s because the ducks and chooks, the goat and dogs, and the pigs – yes pigs – pretty much have free reign up Allport Road in Paengaroa.

There is a photo of a goat on the double bed, a duckling swimming in the bathroom basin and a Large Black pig (before the pig gets large), asleep on a lap in front of the TV. And The Weekend Sun snapped a rescued billy goat at the window – looking out not in.

“There used to be boundaries,” says a reflective Deborah Moore. “But the animals teach you to put things in perspective. It’s enjoyable and it’s quirky.” When the Weekend Sun arrives the place is quacking, clucking, squawking and squealing. And there’s a chook on the front door step and dead-set cute two kilo package of pig comes snuffling out the front door. Hi Stanley.

“You can’t be too precious about it,” says husband Jim. “Otherwise you wouldn’t enjoy it.

“And they’re all cute,” says Deborah, interior designer by day and mother to all God’s creatures on a 28 hectare Paengaroa lifestyle block by night. She falls in love with every one of them. “We are quite ridiculous.” Pigs, dogs, sheep, lambs, rescue goats, chickens, ducks, cows. “And a husband.”

He’s number three in the list of priorities after work and animals. “Nice to be that high really” says Jim. Then this is all his fault. Born on a farm, he spent 20 or 30 years in Auckland and yearned for animals again. So here they are in Paengaroa sharing their lifestyle block, and their house, with a menagerie.

“Like Noah’s Ark – two of everything.” Then a quick reassessment. “More like 30 of everything. And yes, it has got out of hand to some extent.’ Especially the ducks. “Started with two,” says Deborah. ”But they keep fornicating on the front lawn and hiding their eggs, and suddenly another family arrives.” They’ve been meaning to have a cull – it’s been on the to-do-list for three years but you suspect they’d rather live with ordered chaos than part with any animals.

Animal-centric? They absolutely agree. And fascinating. “Everyone who comes up here and listens to our stories, love it. They think it’s gorgeous.” But she’s wary. “You might be fascinated in thinking we are odd.”

But then so many “townies” visit and many, apparently, have never even been near a chicken. “So it’s quite nice to provide a new experience.” Like scratching a 300 pound, tusked up Large Black (that’s a pig breed) wiping his snot on your leg, listening to his deep guttural grunting or cuddling a squealing saddle back like Stanley.

He didn’t have a proper name – and no proper name means no emotional attachment which means no future - he could have been farmed off to other life style block people and into a freezer as pork belly, Boston butt for pulled pork, or bacon.

So when we were thinking Wilbur II was living precariously on borrowed time and a borrowed name, we get an email – Wilbur II was now officially Stanley and his ‘forever future’ at the happy farm was assured.

Stanley certainly lucked it, because he started life as a “biter”, he couldn’t suckle, he bit, which doesn’t encourage good nurturing. And because he wasn’t welcome on the teat, he started losing weight before he had even had his first mud bath. In the wild, nature would have claimed the piglet.

“So we took him off his mother, whipped him inside for three-hourly feeds of formula on a polar fleece blanket under a heat lamp in the laundry.” Hence ‘on the pigs back.’ Animals, especially pigs, on the Moore lifestyle block are raised with love.

And don’t make the mistake of suggesting pigs stink and shouldn’t be inside. “They do not,” Deborah and Jim sing in unison. “Don’t believe us, do your research,” says a defensive Deborah. “Smell a newborn pig and it smells just like a newborn baby.”

“Pigs are extraordinarily intelligent,” suggests Steve. “And you just need to look into their eyes to see it. Each has its own distinct personality and can become as much a pet as a dog or a cat.” Look at Arnold Ziffel from “Green Acres” – the American TV sit-com. Treated like a son, Arnold watched TV, changed channels, wrote his name and spoke ‘pig’ – squeals and grunts.

Stanley hasn’t got his own TV show, but he has figured if the front door is closed you just follow the dog and the chook round to the back door. “There’s no point closing doors because they will always find a way in,“ says Deborah. Into the house, into your life and into your heart.

And no step is too far. Because Deborah once had to take another biter to work so it could be given its   three hourly feed. It was clandestine baby care because Deborah would have to sneak out to her car with a bottle of formula and a piggy poop bag. “There was a park quite close and everything was cleaned up.” The one and a half kilo weakling is now a 150 kilo grunter called Wilbur. A big boy with enormous testicles.

Because Deborah is an interior decorator people make assumptions. “Clients will say, ‘oh you must have a beautiful home’. I tell them I live vicariously – creating their beautiful bespoke things.” Because her home, she says, is like the mechanic’s car, the last one to be fixed.

Deborah can feel a bit overwhelmed. And she likens it to waiting for the kids to grow up and leave home before getting a new sofa. “Well, I am still waiting because they’re not growing up and they’re not leaving home.

Stanley’s squealing for his next feed, there’s a chorus of quacking from an army of ducks on manoeuvres, a Muscovy has commandeered a planter full of water for his personal ablutions, he’s noisily splashing about his business and the beautiful but headstrong billy goat “Beau” wants his

nuts right now, the dog’s miffed that Stanley’s getting all the attention and is “ruffing” him. And the big pig is sitting down because he has been “requested” to do so. Life is all good at the Moore menagerie. And fascinating. And not the slightest bit odd.

Would Deborah have any advice for an anally retentive townie who obsesses about cleanliness and tidiness. “Get over it. Get yourself a pig and a goat and start relaxing.”