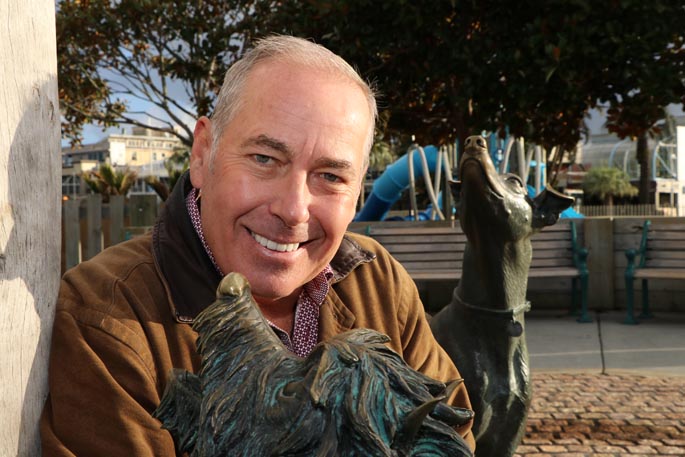 Alongside his mayoral campaign, Tenby Powell is hoping to organise a town hall debate with all mayoral candidates.

Tenby says there is no town hall in Tauranga so he imagines this will be held at Baycourt.

“But the reality this, lets call it public due diligence. The issues are too profound and that the city is too important to just have a whole lot of people running around holding little meetings, and being elected because of name recognition alone without having the citizens of Tauranga having seen and heard from them where there’s nowhere to hide.

“The best place to do that is on stage with a profession adjudicator like Peter Williams and he’s agreed to do it.

“What this does then, it means that people are on stage having to account for themselves, having to answer questions that are going to be asked by the public who I know are just fraught with pain and suffering,” says Tenby.

Tenby says in Tauranga there is a tremendous amount of pain and suffering.

“It’s my absolute belief that Tauranga has got a broken heart. The lack of transparency by elected officials and decisions that are taken arbitrarily despite against the public will is just overwhelming.

“I’m drowning now in tales of woe and sorrow which is why I say this is a city with a broken heart. Now that doesn’t necessarily mean that would give somebody the compulsion to run for Mayor. I’m running for Mayor because my view is that despite Tauranga is New Zealand’s fifth largest city by population, it’s in my view New Zealand’s third most important economically.

“It is a critically important city for New Zealand and it needs good strategic leadership. Tauranga has missed a key development phase because of its exponential growth and I describe it as like the movie ‘Big’ with Tom Hanks.

“It’s gone from you know, parents put a ten-year-old to bed on Friday night and on Monday morning they woke up to a 21-year-old and they want to know where the hell the teenage years have gone.

“It’s time now to have a set of leadership skills and experience that offers the ability to the residents of Tauranga to lead a medium sized city into what’s going to become a big city very quickly, and to have between the Mayor and the city CEO a really functional and positive working relationship when they work as a team,” says Tenby.

He says if he was to be elected as Mayor or to the council at large the thing that people could expect is transparency.

“I’ve got a leadership background that covers great diversity from business. I serve on the Asia-Pacific Economic Community. There are three representatives per 21 APEC nations, and I’m one of the three in New Zealand.

“I hold the rank of Colonel in the army. I’ve done a whole range of things. I’ve chaired the Small Business Council. I’ve been working with the government, both the Key government and now the Ardern government to support small businesses for nearly 15 years strategically across the country.

“I understand funding and Tauranga funding, we’re talking billions here. Not just millions to get Tauranga right and it’s not going to happen by rates increases. So we’ve got to find other ways to fund the infrastructure development going forward,” says Tenby.

Tauranga leadership has been abysmal for many years. Crosby drove the city into mediocrity, and the current mayor (whats his name?), presided over the phoenix carpark demolition and destruction of greerton . And what are they doing to maunganui road? Spending millions to widen the footpath a bit? And causing massive traffic issues. Blake park resurfacing is a disaster, no intelligence! Plant grass in spring, not halfway to winter!

Right person for the Job.

Good guy, knows what he is doing, has a long term vision and suffers no foolishness. Will work well with the new CEO. Born and bred in Matua. Been very successful in business. Not fazed in challenging the big end of town.

Not sure Tenby's the one

Change is needed but never heard of Tenby Powell before and I’ve lived here a long time. Online search shows he considered running for Auckland mayor a few years ago for similar reasons. Shows up other things too so a debate would be good where we can all get the full story about some of his exploits noted online. He’s certainly a great self promoter with photos suddenly here there and everywhere.