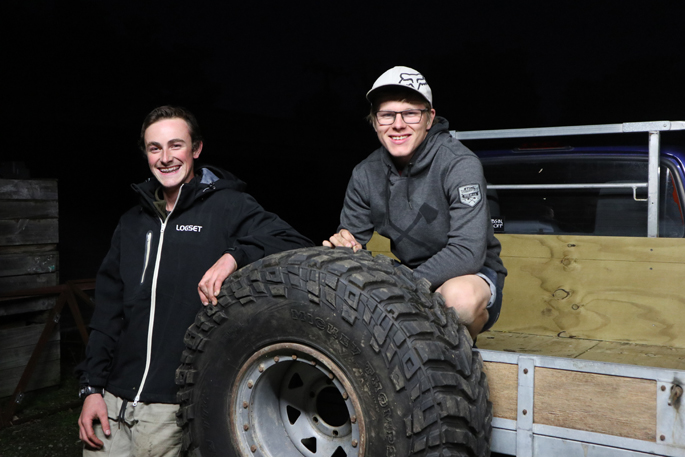 A motorsport event the first of its kind for New Zealand will be taking place later this year in August with two Tauranga teens planning on entering.

According to Caleb Thompson from Off-road Addiction, who is bringing Ultra4 to NZ says Ultra4 is unlimited four wheel drive racing, born in the US by founders Dave Cole and Jeff Knoll to combine rock crawling and offroad racing. The main event each year is the King of the Hammers, which happens in Johnson Valley, California.

“Ultra4 in the US has a big racing series across the country, a new series launching in Canada, a new race launching in Mexico and a five round series in Europe that started in 2012 in England.

“Competitors can expect a new challenge, spectators can expect some exciting watching. We have designed a 5.5km loop track, sand based that we plan to make some obstacles on to test man and machine to their limits as well as encourage safety and team work,” says Caleb.

Dyson Delahunty (19) and 16-year-old Kieran Boston are planning on entering as a team into the UTV section of the event.

Dyson says King of the Hammers race is a cross between 4x4 and off road racing, and he has grown up doing both.

“I am most looking forward to the challenge of the whole event especially since it is all new to us, as we have only stepped our RZRs into Offroad racing and not to 4x4, but hopefully our 4x4 background will help us set a RZR up to do the job,” says Dyson.

Dyson and Kieran will be entering in the UTV class in a Polaris RZR.

Kieran says he has been watching King of the Hammers for the last couple of years now and he says it looks like it will be lots of fun.

“With the opportunity arising from a mate for me to be his co-driver I couldn’t turn it down.

“I’m most looking forward to being out there racing and seeing the sport grow in New Zealand as it’s been a dream of mine to go over and watch the King of the Hammers for many years.

“My favourite part is watching the top guys battle it out over the tuff terrain and huge rock steps and watching how their trucks handle the abuse,” says Kieran.

For someone who didn’t know anything about Ultra4 or King of the Hammers, Caleb explains it as purpose built vehicles, with the speed of Offroad racing and the challenge of obstacles.

“It is more than just the racing, it’s an event to let creativity shine with vehicle builds and ideas, a place to go hang out and compete against people that have the same passion.

“Our good friend and race director of Ultra4 JT Taylor said it best – ‘Take all of your money, light it on fire and throw some big tyres on it’.

“Some people live for boating, we live to go wheeling!”

With this event being the first of its kind for New Zealand, Caleb says the golden question is how big the turn out for the event will be.

“I would love to see a big turn out, the support so far has been awesome. We are running under official Ultra4 racing rules, so there is a few new safety rules that need to be met before we can allow people to race.

“Whether we get a big turnout or a small turnout we will still put in the same amount of effort to make it a memorable event.

“This is the NZ OG race, there will be other races but there will never be another OG race. We think it will be worthwhile coming out, whether volunteering, racing or just spectating,” says Caleb.

The very first King of the North event will be taking place on August 10 and 11 at the Polaris 4WD Park, Woodhill, Auckland.