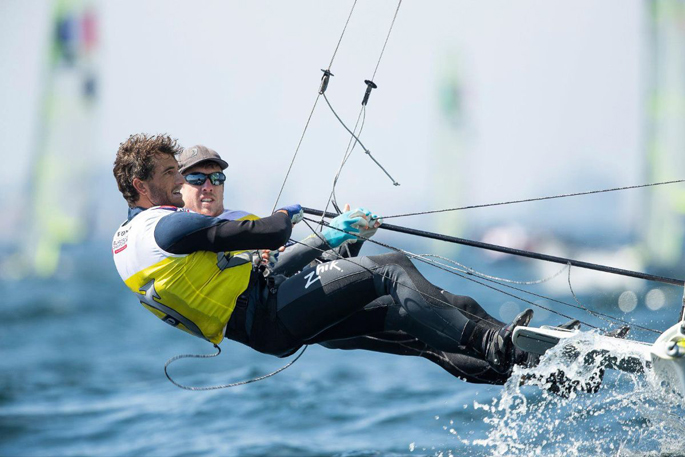 It's often said the real racing doesn't start until gold fleet racing but a number of New Zealand sailors have given themselves every chance of success at the 49er, 49erFX and Nacra 17 European championships with some impressive results in qualifying.

All of the top 49er crews have gathered in Weymouth and the strength of the New Zealand squad has come to the fore with all four combinations among the top 25 who qualified for gold fleet.

Jason Saunders and Gemma Jones are in the mix in the Nacra 17 in seventh and Alex Maloney and Molly Meech are also well poised, sitting in fourth in a tight 49erFX fleet. The Olympic silver medallists have so far been very steady, with eight of their nine results inside the top five and their drop for their worst score an eighth.

Molly says she and Alex have been consistent overall, and they have experienced a mixture of conditions.

"The first day was pretty windy and wavy, which was good fun to get out in and then the last two days we've been inside the harbour with nice flat water with anywhere between 10 and 15 knots, so it's been really cool racing, close fleet racing.

"We closed out qualifying today so it all starts again now we go into gold fleet. We have plenty of racing ahead of us so the plan is to be pretty consistent and just keep trying to tick away with some good results and see how we go towards the medal race."

The softer breeze of 10-12 knots meant racing in the 49er fleet was a lot closer than the first two days, when fresh winds buffeted the course and tested some crews. It meant some combinations came back into contention while others slipped away.

Logan says he and Oscar managed to hold in points wise.

"It was a mixed day but we're happy to qualify for the final series where we are.

"Now we get to race each other, which will be interesting. It looks like a fairly fruity forecast tomorrow so it could be exciting. Hopefully we can keep posting some low scores, keep the boat going fast and keep starting well. That's about all there is to it at the moment. We will just keep trying to stay on that roll."

It's a similar approach to Andy Maloney, who is second after two days of racing at the Finn European championships in Athens.

The stakes are high for a lot of the Finn sailors, with Olympic qualifying spots up for grabs and some countries are also using it as a selection event.

Andy has started particularly well in the large fleet, posting four scores in the top five to sit only four points behind Olympic champion Giles Scott of Great Britain. Josh Junior is 10th after five races.

"It's been tricky to be consistent so far in this event, with one big 80-boat fleet and shifts that come with big pressure differences," Andy says.

"If you get it wrong, it's easy to find yourself a long way behind pretty quickly.

"We've got a lot of racing to go so we'll try to get more consistent with reading these difficult shifts and take it from three. If we put ourselves in the right place on the race track up the first beat, it makes all the difference."

Results and standings after day 3 of the 49er, 49erFX and Nacra 17 European championships in Weymouth:

Results and standings after day 3 of the Finn European championships in Athens: