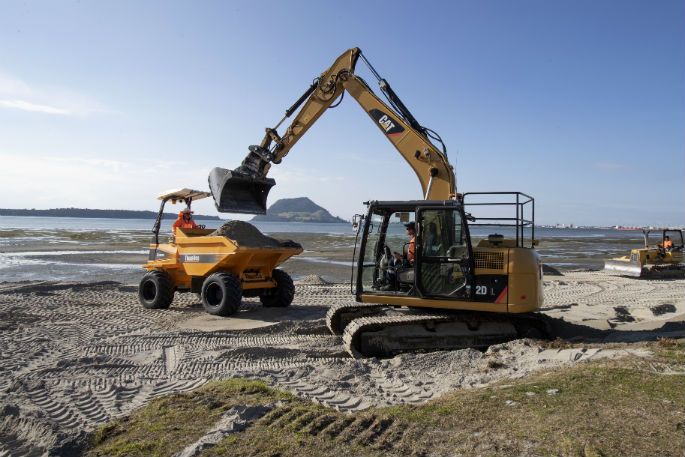 A new beach is appearing at Kulim Park, one truck load at a time.

Thousands of cubic metres of sand is being trucked in and spread out along the waterline to create a more user-friendly area.

The whole project is a bit late thanks to a group of endangered sea birds that moved in on the piles of sand. The sand had been dredged from Tauranga Harbour and stored at the Port of Tauranga.

“Removal of the sand from this stockpile was delayed until April to allow fledging native sea bird chicks who had recently hatched there, including endangered New Zealand dotterel, to safely leave the area,” says Tauranga City Council manager of parks and recreation Mark Smith.

A budget of $100,000 has been allocated to
Kulim Park as part of the Kulim Park sand re-nourishment project.

Other parks that will be getting sand renourishment include Maxwells Road Reserve, Memorial Park, the Matua Peninsula and Fergusson Park.

Mark says the purpose of sand re-nourishment is to increase the use and enjoyment of a number of the city’s harbour parks by introducing clean sand to the harbour margins, and to create attractive, family-friendly, safe swimming environments.

The council has an annual budget of $100,000 to carry out procurement, delivery and spread of the sand. Kulim Park has been given the whole budget this financial year and the project is on budget,
Mark says.

The sand being delivered to Kulim Park comes from the Port’s ongoing harbour dredging programme.

The work is part of an ongoing programme to improve Kulim Park to ensure it can achieve its potential to become one of Tauranga’s iconic harbourside parks, says Mark.