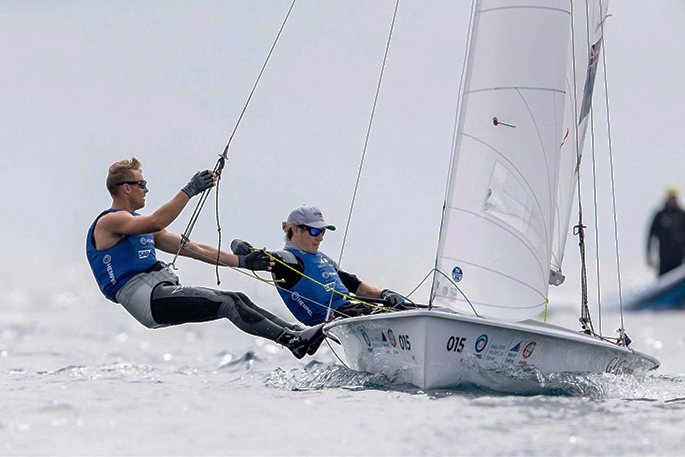 Paul Snow-Hansen and Dan Willcox were fourth in their only race on day three at 470 European championships in San Remo. Photo: Sailing Energy / World Sailing

The crews at the 470 European championships have spent plenty of time waiting around over the last couple of days but they managed to get one race in today which saw Paul Snow-Hansen and Dan Willcox move into the top 10.

It has been a frustrating couple of days in San Remo, with the second day lost completely to a lack of wind and the breeze didn't fill in on the third day until late in the afternoon. It meant a race didn't start until 6pm local time but by that time the wind had built to 9-15 knots.

Snow-Hansen and Willcox were fourth in their race, the final race in qualifying, and the top 35 boats will now move into gold fleet.

The New Zealand pair, who won their last regatta at the World Cup Series in Genoa, were second for much of the race and were satisfied with their final placing given the circumstances. It saw them move up eight places in the overall standings to 10th to leave them 15 points behind Australia's Mathew Belcher and Will Ryan in the lead.

"There was a lot of waiting around for wind," Willcox said. "We spent the majority of day on shore playing cards and trying to stay switched off. One of the forecast models had breeze filling in later in the day so that was what the race committee were holding out for and it eventually came in about 5pm.

"We were happy with the way we raced. We came away with a fourth and finished the qualifying series with no bad results under our belt, which was our goal going into gold fleet. As we have experienced in the past, it's all on once you are in gold fleet."

Importantly, the worst score Snow-Hansen and Willcox have had so far is an eighth (their drop for their worst result) and many teams above them have bigger scores hanging over them.

"We're looking forward to the second half of the regatta and will keep improving day-by-day like we have been trying to do," Willcox said. "We're excited for the racing ahead."

Light winds are once again forecast for day four before more breeze is expected the following day.

Susannah Pyatt and Brianna Reynolds-Smith were 28th in the only race in the women's fleet and sit 30th overall.

Gil Cohen and Noa Lasry of Israel hold a narrow lead in the women's fleet from Hannah Mills and Eilidh McIntyre from Great Britain with France's Camille Lecointre and Aloise Retornaz third.

Results and standings after day 3 of the 470 European championships in San Remo: