Saturday has a high risk of fog for some places 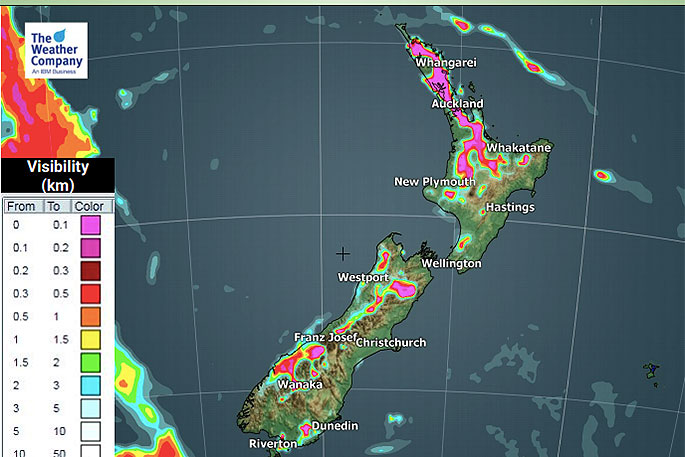 FOG MAP for Saturday shows foggy areas around the upper North Island at low levels (in pink). You may notice similar pink shading over the Southern Alps, this is cloud at much higher levels.

The humid sub-tropical air flow, combined with an area of calm high pressure plus the longer nights is the perfect recipe for fog.

Developing as early as Friday evening, WeatherWatch.co.nz expects areas of fog to form around the upper North Island and some isolated pockets elsewhere across the country if winds are calm enough.

Visibility will be lower than 100 metres in some places tomorrow morning.

WeatherWatch.co.nz head forecaster Philip Duncan says fog is simply cloud at ground level and much like cloudy spells in the sky not all of it can be perfectly forecast.

"Areas like Waikato, Auckland and Northland have the highest risks for fog on Saturday but as we saw last Saturday foggy areas can be hit and miss so it's unclear if Auckland and Hamilton airports will be impacted by fog tomorrow morning".

Philip says those flying should check with both the airline and airport websites tomorrow morning well before travelling.

"Fog can also form after sunrise out of no where, so the best thing for us to say is that there is a moderate to high risk of foggy areas around the upper North Island on Saturday."

WeatherWatch.co.nz says fog may linger in some places until nearer to noon, but the afternoon looks warm and dry nationwide and with warmer than average temperatures forecast that is a sign the fog will all burn off at some point.