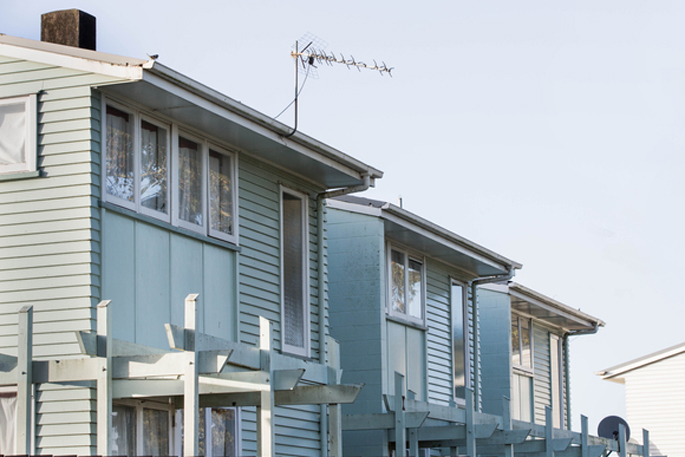 As winter approaches demand for housing is still outstripping supply.

The government is yet to release its latest numbers of how many are waiting for a state house but officials say demand continues to grow, even as more state houses come on stream.

Shika Simran, her husband, and two young children were moved into a new Housing New Zealand home in October last year and have already noticed the benefits of a modern, warm dry home.

"My daughter got asthma, so this is really good, it has carpet and everything. She used to use an inhaler every day, but now hardly ever, only when she's playing and then she's coughing and then we give her an inhaler, but not every day and even doctor's visits have cut down which is really good."

Their new home in Waterview is one of many built in the government's major state house building programme.

The government says it is on track to complete the additional 1600 homes it budgeted by the middle of the year, and Housing New Zealand says it has 2300 homes under construction.

At the last count more than 10,700 people were on the state housing waiting list.

"Our expectation is that those numbers have continued to increase, but what we're looking to confirm and we'll release the numbers shortly, our understanding is the numbers have started to ease off in terms of some of the increases we've seen."

But Scott says despite that demand is continuing to outstrip supply.

He says they are working on a variety of solutions.

"The key thing that we've been focused upon is trying to bring on as much new supply as we can, so that we can have a far better approach and response as we get into the winter months this year and make sure that people have a range of options in front of them when they are confronted, and if they are confronted with any situation of homelessness."

A government target of an additional 1500 places for homeless in winter was exceeded last year with an extra 680 transitional houses and 1000 families getting a state house.

But in the first three months of this year the Ministry of Social Development paid out more than $23 million in emergency housing special needs grants to pay for temporary accommodation like motels.

That was more than three times the previous March quarter.

Auckland's City Missioner Chris Farrelly says homelessness had not decreased - 300 people came to the mission yesterday for breakfast and lunch and he estimated half of those had nowhere to live.

However he says new programmes like Housing First, had helped house 90 people in Auckland who need it most - by providing a home quickly and also dealing with the problems that led to them being on the street.

"The most vulnerable, the most high need, this winter are now in homes and our organisations are wrapping services around those people to keep them in their homes.

"The government is just going to give us another 100 places for Housing First in the next 12 months, this is a really really positive initiative in our country. There's now a pathway emerging, really clearly, to end homelessness."

"We've got to be doing stuff so that this never happens again, we should not be facing another winter where we know that people aren't going to be able to be properly housed."

He says things like adjusting the accommodation supplement to keep up with housing costs, and shared home ownership and rent-to-buy schemes should form part of the solution.