A tree planting working bee was held on Saturday morning in the Kopurererua Valley (K Valley).

The inner-city planting project is led by the Rotary Centennial Trust as part of its ongoing commitment to the restoration project in K Valley.

“It’s been a great project that’s been going on for many years,” says Tauranga Mayor Greg Brownless, “and it’s initiated by the Tauranga Rotary Clubs through the Centennial Trust that they organise.

The project is believed to be one of the largest urban wetland restoration projects in Australasia.

Highlights include 20 hectares of weed infested land cleared and 15 hectares replanted with more than 200,000 native trees and plants; 15km of boardwalks and walkways developed; partial stream realignment and creation of several new lakes; over 50 community planting days; over $1 million worth of investment through the Rotary Centennial Trust and in-kind support from City Partners; and a significant increase in birdlife and biodiversity in the valley in recent years.

“Of course the bonus of getting a road through here or buying that land is that we can also create a fantastic park for walking, cycling, and in this particular case all the vegetation that they’re planting here,” says Greg.

“So it’s really a great project. People love to turn up, get a spade, plant a few trees and get back to nature.”

The Kopurererua Rotary Centennial Trust - Kopurererua Valley Project has been running for 15 years.

“The Rotary Centennial Trust was started in 2004,” says Mark Dean. “It’s been raising money and providing plants for the valley ever since.

“I think up to now we’ve provided nearly one million plants into the valley. And these have been planted largely through planting days like this.

“The Rotary Centennial Trust has also provided funding for some of the bridges, and we’re helping to develop this really unique wetland right in the middle of a major city.

“In fact it’s one of the largest wetland restoration projects that we know of.” 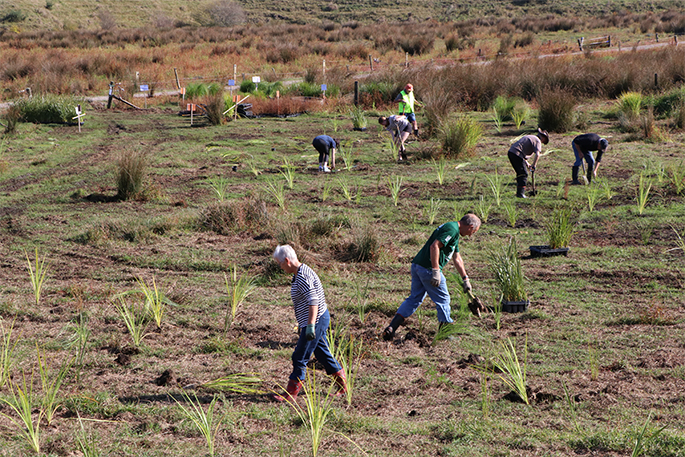 Running from Judea in the north to Tauriko in the south, it’s bordered by the neighbourhoods of Te Reti, Gate Pa, Greerton, Westridge and Cambridge Heights.

For many years Kopurererua Valley was inhabited by the people of Ngai Tamarawaho. Remains of pa and other archaeological sites are located throughout the valley.

In terms of New Zealand history, the valley is important.

During the mid-1800s, it was the staging point and retreat path for two significant battles between Maori and British Colonial forces – the Battle of Gate Pa and the Battle of Te Ranga.

Planting is often held during May, coinciding with Arbour Day and World Environment Day.