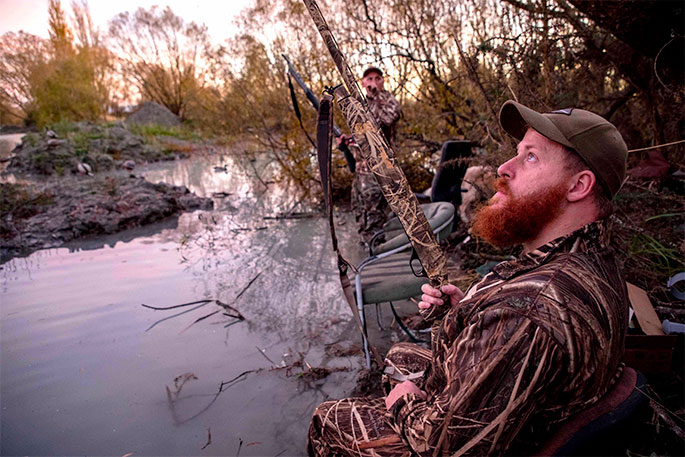 Kurtis Smith (front, with beard) from Rangiora on his first duck hunt. Kurtis has spina bifida and has always wanted to go duck hunting. He answered a Facebook post from Jarrad Mehlhopt, offering a new hunter the opportunity to go game bird hunting.

Fish & Game has applauded duck hunters for a "safe and compliant" start to the new season.

Thousands of hunters turned out to hunt birds such as mallards and paradise shelduck.

Fish & Game officers joined forces with Police officers in ranging operations in both the north and south islands.

Fish & Game Communications advisor Richard Cosgrove says that hunters appear to have taken on board ‘safety first’ advice and other messages - in particular those relating to the new firearm laws.

"At this stage we’ve had no reports of any firearm-related incidents or injuries which is gratifying given the thousands who have headed out to harvest birds.

At the same time, we have had no reports from any of our 12 regions of any prohibited firearms being seized, he says.

As just one example, rangers in North Canterbury had checked 150 hunters and had not detected any offences.

"We applaud hunters for doing the right thing - doing their homework on new firearm laws and sticking to the rules and regs surrounding bag limits and the like."

Mr Cosgrove says its likely there will be some prosecutions as normal however, for breaches such not carrying a hunting licence and banned use of lead shot near water.

As usual, with Opening Day, hunting fortunes varied from place to place according to local weather and other conditions, hunters’ individual skills and bird numbers.

Starting in the North Island, the Auckland/Waikato Region had a good start with officers reporting plenty of ducks around but some difficult hunting conditions.

Chief Executive Ben Wilson says in some areas it had been "super foggy" however ducks were plentiful on the Hauraki Plains where a number of hunters got their bag limits.

Hunters were also reasonably happy at the huge Whangamarino Wetland, the second largest wetland in the North island.

In Taranaki, hunters spoken to had been happy with their morning although the number of mallards harvested had not been large.

But in the north of the region hunters on maize paddocks had done quite well paradise shelduck, says Fish & Game Officer Allen Stancliff.

The South Island, as usual, appears to have provided the best hunting on the day.

Even drought conditions in the north of the South Island appeared to have little impact on the hunting.

"Hunters had good success with the experienced getting close to their bag limits and novice hunters managing to bag a few."

Mr Kersten says hunters’ bag were very diversified with plenty of paradise shelduck harvested alongside greylards (hybrids from mallards and grey ducks), and the occasional shoveler and swan.

In North Canterbury, weather conditions were described as pleasant with fog in northern areas helping pond hunters in particular.

Most reported seeing "huge" numbers of birds although they were difficult to call in due to the fine weather.

Areas with open water such as Lake Ellesmere shot pretty well for a time.

"Most hunters in the area all managed to shoot two or more birds in the first hour, and some in the right places had very good tallies, with some reaching their bag limit of 25 birds," Mr Barr says.

"One seasoned hunter confidently said that he hadn’t seen as many birds in the past 20 years."

Established ponds that had been grain fed provided some "very good" hunting in many cases.

"Good numbers of around 30 to 60 birds per pond were also reported by hunters on a number of Canterbury’s many irrigation ponds," Mr Barr adds.

He says that the season is looking very promising in the region, and the first southerly winds, which provide more favourable hunting conditions, "will be very exciting for hunters in the region."

Fish & Game officers in mid Canterbury say there were lots of birds around along with plenty of hunters in the fine clear conditions.

"A couple of door knocks will provide hunters with access to some fantastic hunting opportunities," he adds.