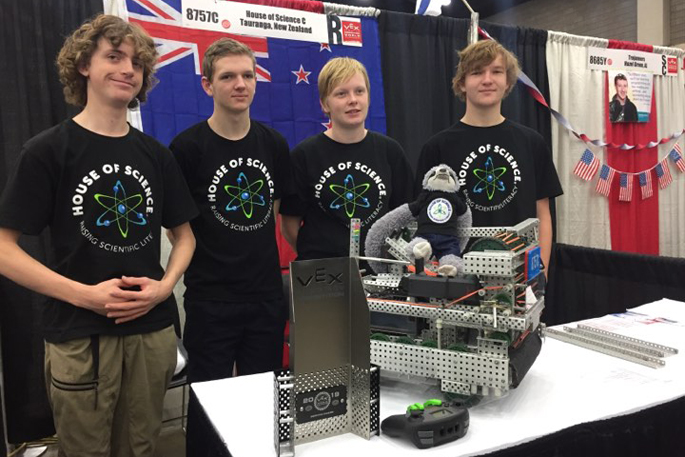 A small robotics team from Tauranga is taking the world by storm.

The House of Science Tauranga robotics team made up of four students from schools across the region competed at the VEX Robotics World Championships in Louisville Kentucky, and they are coming home with three trophies.

House of Science Tauranga robotics coach Paul de Rijk says the group had to qualify to be able to compete in the United States.

“New Zealand gets about six spots, so the best teams in New Zealand’s try to qualify through our national championships, and we were lucky enough to get one of the qualification spots as they did pretty well at our nationals in Auckland in February.”

“This was started in the United States because they were finding they were not getting enough engineering students in universities, they were doing IT or other subjects.

“They wanted to get this into schools to give kids the passion to want to do engineering, and it’s been tremendously successful.”

“Because the event is American based, it is always held there every year.”

The competition is made up of six divisions, with 100 teams in each division.

Paul says two teams join to play another two teams, which is the red team versus the blue team.

“It’s two robots versus two robots in a two minute point scoring game. It’s tactical, with blocking, scoring, and whoever’s got the most points at the end of the game wins, and the winner precedes.

“Our guys got to the division final and they got to the last four, but unfortunately their alliance team mate had a mechanical failure in the final, which affected them, and they lost 20 points to 14.

“They were sad to lose, but they did exceedingly well to get that far.”

Paul and his wife Toni set up the robotics club alongside House of Science Tauranga.

“The House of Science Robotics club was first established for kids who wanted to study and learn about robotics, as their schools didn’t run a robotics format.”

“After the nationals at the end of February the team had to completely rebuild their robot to accommodate a new electronics system which we finally received after ordering it back in October 2018.

“All of the New Zealand teams were in the same situation due to supply issues from the USA.

“Our team had to learn a new programming language to operate this new system also, so it was even more of an achievement when they were competing against teams that had the new electronics for most of the season.”

Despite the setback prior to the world championships, the Tauranga team still excelled and competed to a high standard amongst the world’s best.