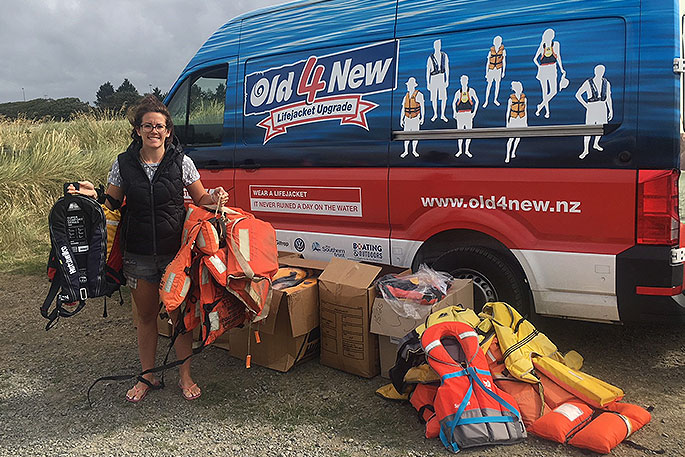 Coastguard’s Old4New Lifejacket Upgrade campaign has been recognised at the New Zealand Search and Rescue Awards held at Parliament.

The campaign received a Certificate of Achievement for Support Activity for helping to keep New Zealanders safe on the water by encouraging people to trade in old, damaged or obsolete lifejackets for discounted modern fit-for-purpose Hutchwilco lifejackets.

Since the campaign started five years ago, over 10,000 old lifejackets have been traded in and taken out of circulation meaning thousands of Kiwis are now safer out on the water.

“This is a huge honour for us as it acknowledges the significant hours our team put into bringing the Old4New campaign to communities around the country.

“The Old4New team not only gets boaties sorted with lifejackets but they also impart advice on how to stay safe on the water.”

The Old4New campaign is made possible with generous funding from Maritime New Zealand and delivered in partnership with New Zealand companies Hutchwilco, Giltrap and Boating & Outdoors.

The NZSAR Awards are presented annually in Wellington and recognise outstanding achievements and the courageous people involved in search and rescue in New Zealand.

Coastguard is a charity made up of over 2,000 highly-skilled volunteers located at 63 units around the country.

Around $20 million is required annually to support Coastguard’s work with 12% of funding coming from the government.

The rest is raised by Coastguard from the wider New Zealand community.