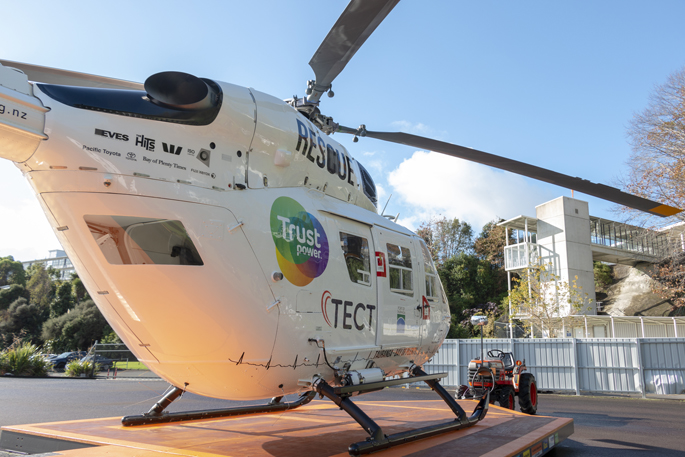 No matter where in the country you live, if you get into trouble, help from above is probably closer than you think.

325 flights were taken in the Bay of Plenty region last year, ranging from the popular swimming beaches around Tauranga to the walking tracks of the Urewera Ranges.

The Chopper Appeal aims to raise funds and awareness for the rescue helicopter services, with all donations going back to the region where they were collected.

“Chopper Country extends from our rugged mountain ranges and sweeping coastlines to right over the back fence,” he says.

“Whether it’s a medical event on a ski slope or a crash on a bike trail just down the road, choppers are there for Kiwis when something unexpectedly goes wrong.

“It’s comforting to know that help is close by, no matter where we are. That’s why we’re proud to have partnered with the choppers for more than 35 years.”

This vital service is funded by a combination of individual donations, fundraising activities and sponsors like Westpac. A total of $1.22 million was raised last year and the goal is to beat that again in 2019.

“We rely heavily on the generosity of our local community to fund the shortfall that allows us to be rescue ready 24/7, 365 days of the year”, says Sharni Weir from the Philips Search & Rescue Trust, which operates the Trustpower TECT Rescue Helicopter.

The 15th annual Westpac Chopper Appeal will run throughout May. It is supported by fundraising activities in schools and community centres, as well as a nationwide street appeal on Thursday, May 9.

Westpac funds the marketing and administration costs of the Appeal, and distributes all of the funds raised back to donors’ local rescue helicopter trust.

Go to https://www.chopperappeal.co.nz to donate.