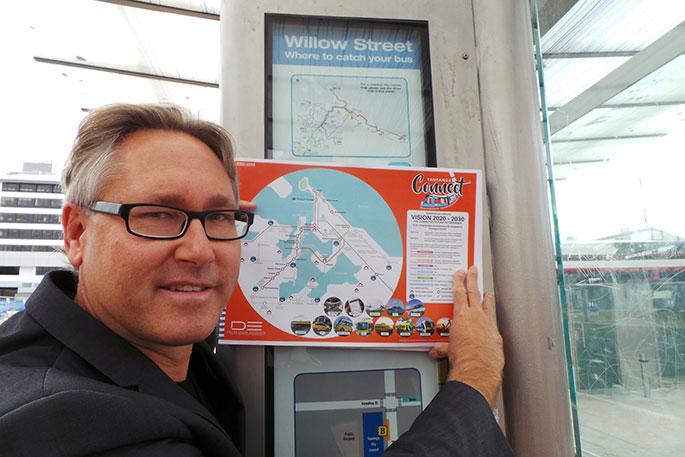 Mark Wassung holding up his redesigned bus routes alongside the current network in 2018.

“For the last three years I have been trying to promote the usage of Existing Rail for a Suburban Passenger Train Service for Tauranga.”

He says this is has largely fallen on deaf ears with the local authorities, but has excited a lot of public comment.

“One of my Facebook postings on this has had 22,000 engagements. Unfortunately, the discussion has largely gone off on a tangent by trying to link Tauranga to Auckland via Hamilton.

“In my opinion, the winding route between Hamilton and Tauranga and the ventilation of the Kaimai Tunnel for comfortable passenger requirements, will be too onerous in cost and the fact that this route is not suitable for high speed trains. Therefore, the time constraints will probably cause the line to be underutilised.”

Mark says his preference for a suburban passenger train service for Tauranga has always been using the existing rail line between Omokoroa and Te Puke, with new short rail extensions to Coronation Park Platform in Mount Maunganui and Parton Road Platform.

He says double tracking at this early stage can be avoided by constructing small lay-bye short sidings to allow the suburban passenger train to pause, and allow the Port Freight Train Traffic to have priority all day.

“Except for small windows at morning and evening peak hours (say 7.30am to 8.30am and 4.30pm to 5.30pm which would also help with reducing level crossing congestion/backup time), when the suburban passenger train service – a short train consisting of one locomotive and 2/3 coaches - could have priority.

“This will avoid major infrastructure costs for double tracking, tunnels, bridges, harbour bridge clip-ons etc. and will contribute in a major way to reducing traffic congestion on the existing SH2 and The Eastern Link.”

Mark says platforms can be built at the locations shown on his drawing and can take the form of inexpensive temporary structures (timber deck platforms and prefabricated modular shelters to start).

“I have observed redundant suburban coaches from Auckland in Taumarunui. Possibly two or three of these coaches with a locomotive could be utilised in a first stage trial between Omokoroa and the CBD. 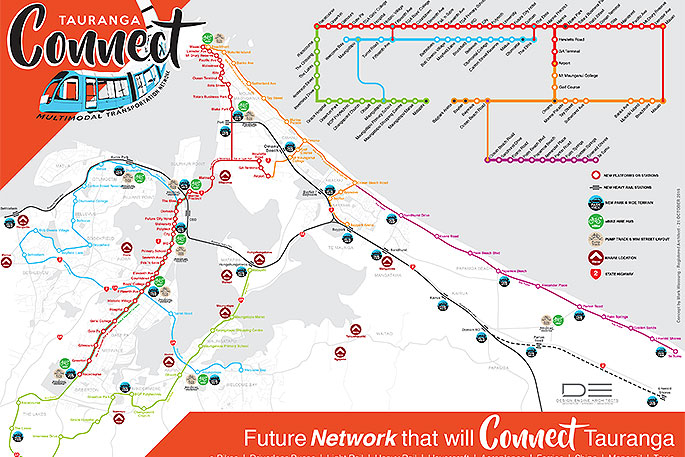 “Later this could be extended to Coronation Park and to Parton Road park/ride and later still to Te Puke.

“Hopefully the local authorities can begin to identify park/ride terrains along these lines as per my drawing, before urban expansion precludes this.

“Let’s abandon expensive consultants and sit down with the three Councils, port and KiwiRail and thrash out something that will be of benefit to all.”

This town runs on a knifes edge as far as traffic congestion goes. It would provide a safer alternative to SH2 from Omokoroa. We all seem to have the attitude that we should be able to drive anywhere we want at any time and not get held up. Rail is the only logical way forward to reduce the impact of transit on the environment too. The hardest part isn’t getting rail working, it’s changing attitudes.

Not a bad idea

Not a bad idea to sit down with those that would be involved and see what the outcome would be.Simon Bridges and the National Party are only interested in motorways not rail so expect some comment from there.

I cannot believe people think this is good. This is a small town and most people do not work in the CBD. It’s not Tokyo. Sure, I’d like a nice comfy train ride down to the Mount now and again. Poof, like magic, tracks, trains and staff cost nothing.

Agree with slim shady.This is the same guy who put up a 200 metre design to cover a 50 metre pedestrian overpass to go over Maunganui Rd at Bayfair plus an over the top design of a building for cruise ship passengers near Coronation Park.He is only in it for his own ego.

And not before time. The transport system badly needs a rail service . Let’s hope it happens soon and gets done properly. It might take time to get people out of their cars but traffic in Tauranga is getting worse . An efficient train service could make a difference.

Te Puke, Omokoroa! To service a handful of commuters? It would be like an airline building a runway and supplying a jumbo to do just two trips a day. One out, one in. Parked up the rest of the day. Who’d be daft enough to do that? This bloke just wants his hands on my money so he can build a dream.

Self proclaimed ’guru’. Don’t be fooled by professional looking drawings and words that are not compatible with the reality of the existing tracks. Any high school student could draw that.

Makes great sense. Too sensible for Twyford to see though, unfortunately.

Finally a man who talks some common sense. As Kiwirail have enabled trucks to travel on their rail corridor, so also could 19 seater buses be converted to also use this rail system. With the use of modern GPS systems both trains and buses could use the same rails with the buses pulling off the rails at suitable places when freight trains are approaching. There would be minimal capital costs to get a shared system in operation.