Tauranga mayor calls for bridge to be four lanes 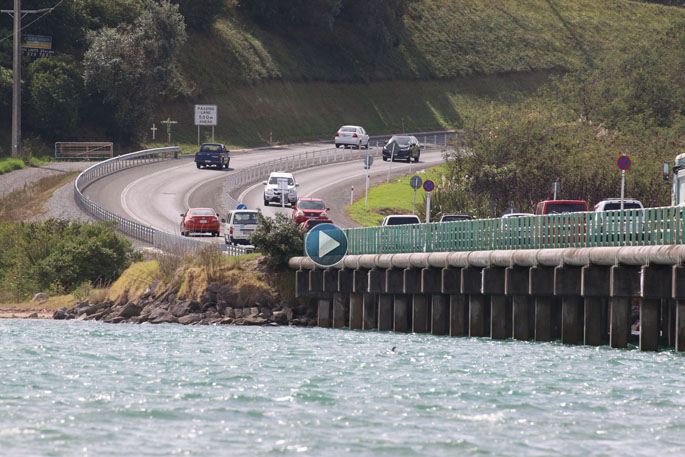 The Maungatapu Bridge has Tauranga City Mayor Greg Brownless wanting NZTA to do something about it. Image: Daniel Hines.

Tauranga Mayor Greg Brownless is calling for the Maungatapu Bridge to be four lanes, following a fatal crash which claimed the life of Mount Maunganui man Stephen Fifield.

The 51-year-old died in a crash where his ute crashed through the railing on the bridge and plunged into the Tauranga Harbour.

Police received a call to the incident around 8pm on Saturday night.

The road between the Maungatapu and Baypark roundabouts was closed for some time, reopening on Sunday just before 2.30pm.

Greg says he would like NZTA as the owners of the State Highway and bridge to consider four laning a new bridge, with a safety barrier down the centre line.

A member of the public who spoke to SunLive says he thinks our roads need urgent attention to make them a heck of a lot safer for people to drive on.

When asked about his thoughts on the highway being turned into four lanes he says for an accident to have happened there once before when someone went through a rail, then questions need to be asked about whether it needs looking into.

But NZTA’s Bay of Plenty Systems Manager Rob Campbell says the Maungatapu Bridge was constructed in the late 1950’s and remains in good structural condition.

“The original design of the structure limits the amount of strengthening work we can do on the railings to improve their performance.

“There’s not currently any plan to upgrade or replace the bridge however we are investigating options to improve the performance of the railing while recognising it will not be possible to meet the standards that would be expected on a bridge being built today.”

This response from NZTA is a joke, Tga has more toll roads than any other city in NZ I think, our growth is huge, we have the biggest volume Port in NZ and yet we are treated like the poor cousin for Road funding. Tga Northern Link has been cancelled - the council and Govt both need to get themselves on the same page! Ask yourself how Auckland, Hamilton & Chch all are getting millions on roading spent and NO Toll roads??? Tga has Toll roads and extremely low spend on road improvements!! Surely as one of the top five cities in NZ, Tga should at least have a four lane link road system and connection to other cities via four lanes. It will never be cheaper!!!!!!!!!

I commiserate with the family, but believe this bridge should stand in line behind the Turret Road bridge - which is also, believe it or not, a national road.

Typical NZTA response to BoP’s appalling road system- they appear to lack any ability to push the region’s need for better infrastructure - one wonders if there is a case here to take them to court for a lack of "duty of care", as operators of a transport system that is sorely inadequate and downright dangerous.

The biggest issue is the attitude of Kiwi drivers. We can’t spend billions putting barriers up and building wider roads and bridges just so Kiwis can drive like cretins.

Time for this Gvt to step up

Well said Mayor Brownless ...four Laning this NATIONAL Road Bridge is a no brainer. Tauranga growth is second to none and death toll in our region reflect the need to URGENTLY address this PLUS State Highway Two (access from the north)

New bridge a must

Yes, 4 lane it. A fatal accident has a social cost of $4.4 million. This is not the first fatal on this bridge. Stop pussyfooting around, and get on with a new bridge. Once again, NZTA want to patch it up. When they do finally replace it, the costs would have doubled, and they’ll keep putting it off.

Maybe for the traffic flow up until the 90’s but that bridge is a blackspot now, Mr. Campbell. Don’t be so quick to pat yourself on the back.