A wet Monday for most, but is improving 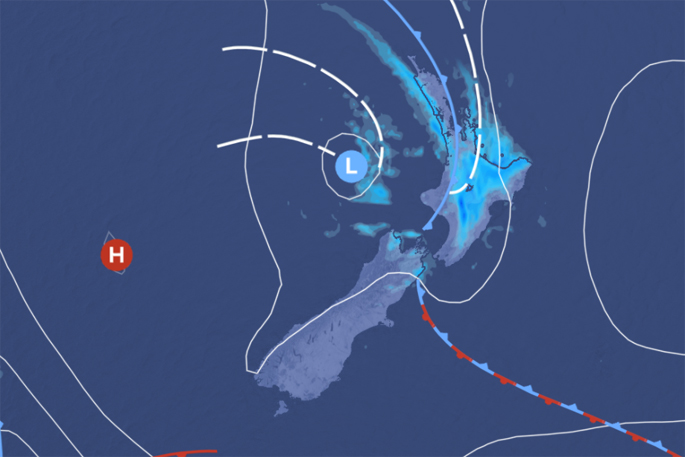 National outllook of what is instore. Image: Metservice.

As the long weekend draws to an end, a front moving slowly eastwards across the North Island will bring rain to much of central and northern New Zealand, with the heaviest falls expected in Eastern Bay of Plenty and the Gisborne Ranges where a Heavy Rain Warning remains in force.

“Taranaki received Warning amounts of rain in the last 24 hours, with around 130mm of rain falling about the Mountain, and around 100mm near the coast north of the Mountain” explains Meteorologist Kyle Lee.

The Heavy Rain Warning for Taranaki has now been lifted as the rain has eased there, but they can expect showers today with the risk of thunderstorms. There are also low and moderate risks of thunderstorm development for the upper North Island, Nelson and northern parts of Buller.

Meanwhile, the lower South Island enjoys relatively settled weather as it lies under a ridge of high pressure.

The rain bearing front and associated low pressure system will move away to the east tomorrow, and although showers are expected to over central and northern New Zealand, the trend by the end of the day is for the showers to ease as a ridge of high pressure builds from the south.

On Wednesday, the country will be seeing more settled weather with only the east coasts and the far south still seeing some precipitation. This will be good news heading into Anzac Day as the ridge continues to build over the country.

“On Anzac Day, there will be plenty of settled weather for dawn services around the country. Remaining showers in the east will clear and the weak front in the south will bring rain to the west coast of the South Island” continued Lee.