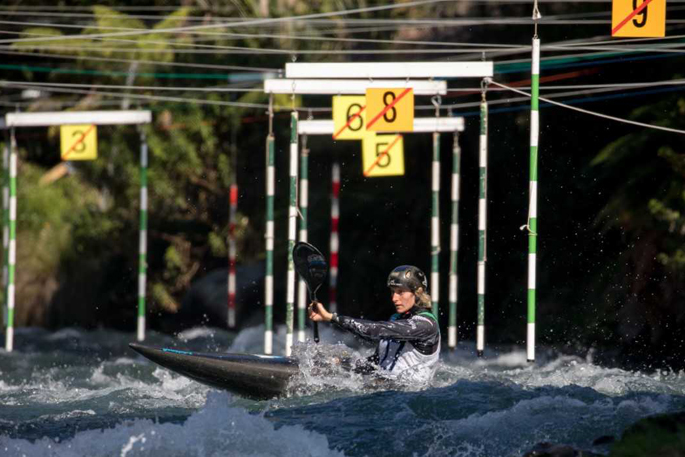 Luuka Jones on her way to victory in the women's k1 final at the New Zealand canoe slalom championships in Kawerau over the weekend. Photo by Jamie Troughton/Dscribe Media.

She may have narrowly lost the side bet but Luuka Jones was otherwise completely dominant at the New Zealand canoe slalom championships in Kawerau over the weekend.

The three-time Olympian claimed both the K1 (kayak) and C1 (canoe) titles on the Tarawera River, putting daylight between herself and the chasing pack as she prepares to leave for another European season next week.

The only race she lost was a personal challenge against coach Campbell Walsh; Walsh's 84.59sec time in the men's final was just over a second faster than the 85.83sec time Jones posted in the women's final.

"I couldn't have gone much faster really and that was reflected in my time - I was really close to beating Campbell and that was the closest I've ever been to him," Jones says.

"I was really happy with that - I'm taking away a lot of confidence from nationals and looking forward to going over to Europe and carrying that consistency and those sorts of performances through into the World Cups. If I can paddle like that in the big international races, I should do pretty well."

The 30-year-old was 8.62secs clear of under-18 paddler Hannah Thomas (Tamaki Paddle Sports) in the K1 final, with under-23 Courtney Williams third in 95.73. She claimed her first-ever K1-C1 double at national level in emphatic style, finishing today's C1 final in 98.55secs, 18.55secs ahead of Thomas, with Jane Nicholas (Cook Islands) just another 0.29secs back after picking up three penalty touches.

While Thomas was impressive in her silver-double, there was also positive signs for the next decade or so, with a number of under-16 and under-14 paddlers coming through. Leading the charge was Tauranga's Kate Hawthorne, who was the best-placed under-14 competitor in finishing 14th in the K1 women's semifinal.

The men's racing was a lot tighter than the women's division, with Tauranga's Jack Dangen winning his first-ever men's K1 title and Patrick Washer claiming his second men's C1 crown.

By his own admission, Washer's first title in 2014 - as a rangy, fresh-faced 16-year-old - was a bit of a fluke but his latest triumph owing a lot more to elbow grease and discipline.

The 21-year-old picked up a penalty touch in the final but still managed to clock 93.26secs, 0.92secs clear of Australian Lachlan Bassett, with Kiwi defending champion Ben Gibb third in 94.72.

This win mean a lot more than Washer's first.

"I've learned to embrace the pain in training - previously, I was a bit of a sook. As a result. I've started training harder and - blow me down - I've started going faster!"

Another Tauranga paddler Jack Egan was fourth just 3.38secs back, topping the under-18 division ahead of a cluster of rising talent - Oliver Puchner, Lewis Groos and Finn Anderson filled the next three places in the final.

Dangen only turned 21 this week but celebrated in style, edging defending champion Finn Butcher (Alexandra) by just 0.35secs in an enthralling final.

His time of 81.42secs was clean, bettering the second-placing to former Olympian Mike Dawson in 2015.

"I struggled a bit in qualifying but I've been to Kawerau plenty of times and it's a fast course that I really enjoy," Dangen says.

"I put down a pretty fast time and then could only watch as Finn did the same - I'm pretty stoked to just pip him in the end."

With Dawson recently retired, other top Kiwi K1 males Callum Gilbert and Zack Mutton elected to skip the New Zealand nationals to get more experience racing in Europe, with this year's world championships in Spain crucial for claiming Olympic spots in Tokyo next year.

New Zealand is also hosting the 2021 ICF junior and under-23 world championships in Auckland, with the two-year countdown to that event launched yesterday. 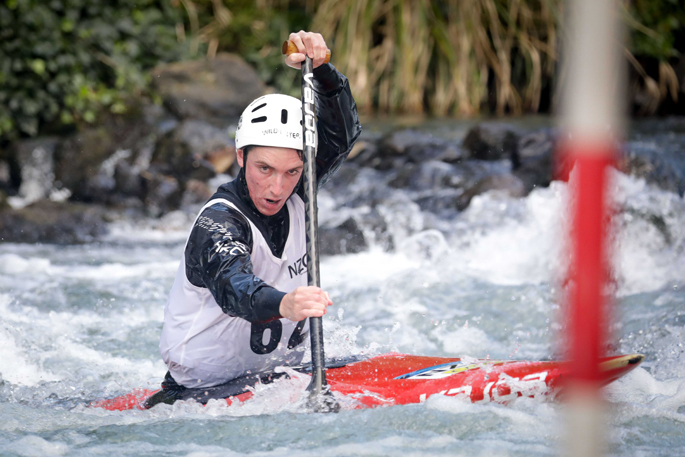 Tauranga's Patrick Washer on his way to victory in the men's C1 final at the New Zealand canoe slalom championships in Kawerau over the weekend. Photo by Jamie Troughton/Dscribe Media