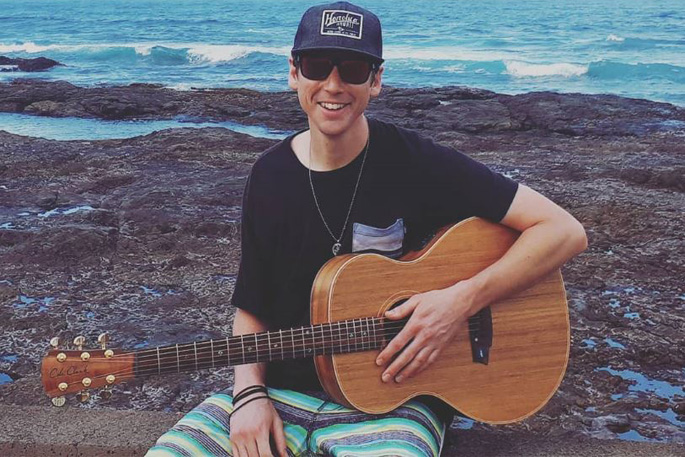 A musician who was in the process of shooting a new music video when their guitar was stolen over the weekend, is offering a cash reward for its return.

“I was in the process of shooting a new music video for my song ‘Papamoa Skies’ which will be released next month,” says musician Jeremy Thom.

“We were doing a scene at the ‘Hope Wall’ on Papamoa Beach Road and Domain Road. I had put the guitar next to the car while packing up the camera gear and some other things.

“Unfortunately we left for the next location without the guitar. I had left it in the carpark at the dairy.”

Jeremy says when he returned half an hour later the guitar was already gone.

“It’s a one of a kind guitar and I’m sure is the only one in the country.

“It is a left handed Cole Clark Angel 2 made from Tasmanian Blackwood. It has a three piece back, gold coloured turning keys, and has a small blemish on the neck at the 12th fret.

“It has a very unique look, all Cole Clark guitars are slightly different.”

Jeremy is offering a $250 cash reward for his guitar.

“I am devastated to have lost it. I bought it in Australia last January and use it to perform my music live as well as for recording.

“It was meant to be my forever guitar, I’m very sad that I don’t know who has it or where it is.”

Whoever lifted it is a low life in our community,but for a man to leave his tool of his trade behind is not what I call a good tradesman.Hope you get it back in good shape.