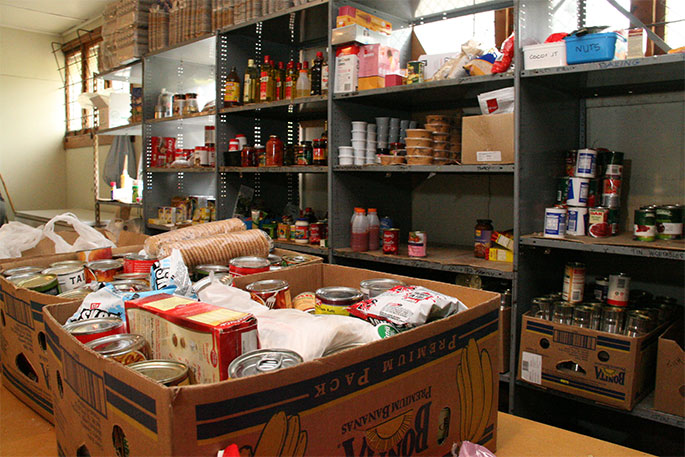 More and more people are asking for food parcels as they struggle with the cost of living.

More than 120,000 people nationwide are approaching the Salvation Army for help each year.

The Salvation Army believes part of the answer to ending poverty lies in providing more families with valuable life skills.

It’s for that reason that the Salvation Army in Tauranga is pleading for support to help crowds of people frontline staff see every day.

“It takes time and support to break the cycle of poverty. Every hungry person who comes through our doors for a food parcel would benefit from longer-term help - budgeting sessions, social work or counselling,” says head of The Salvation Army’s Community Ministries, Jono Bell.

“With the support of people here in Tauranga, we supported more than 200 families in 2018 with social work and if we had the resources we could help many more.”

Tauranga Corps Officer Lieutenant Francis Vemoa says there has been a huge increase in demand for emergency housing, reflecting the rising cost of living in the city.

“Here in Tauranga accommodation has become scarcer and as more people move from Auckland, Wellington and even Hamilton people are asking for help from The Salvation Army,” Francis says.

“More people means more demand on housing, which pushes costs up. We are distributing more food parcels each year.

“The Red Shield Appeal helps us to support the increasing need in our community.”

“It’s astounding if you think of a packed stadium filled six times over with the number of people who are asking for help with adequate housing, food and other essentials to get by in New Zealand. This is what we see on the frontline consistently every year.”

The Salvation Army is calling for public donations to help it increase its services and make a dent in New Zealand’s poverty statistics.

“Our 70 Social Service Centres can only stay open for limited hours because we don’t have enough trained staff,” says Jono.

“Unfortunately, the reality is that for many of these people we can only offer immediate support which, while important, doesn’t get to the root of the problem,” says Jono.

The organisation’s iconic shield badge, first worn by Salvation Army Officers who were supporting soldiers serving in the Boer War in South Africa, is now regarded as a worldwide symbol of compassion and hope.

“The Red Shield Appeal is a chance for every New Zealander to contribute in a meaningful way, to make a real and positive difference in their community. Our wrap-around services are designed to give people the tools to build a stronger future for their whanau, but we can only do this with the public’s support,” says Jono.

Donations can be made online at www.salvationarmy.org.nz/redshield or given to a Salvation Army street collector between April 29 and May 5.