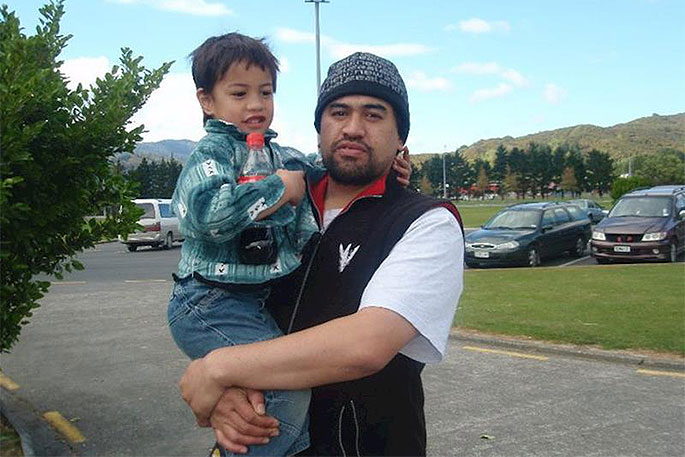 Dave is making steady progress since assault on April 7.

Friends and family of a Tauranga man assaulted on The Strand are coming together to show their support.

Dave Karaitiana was found unresponsive on The Strand, next to the playground, around 3.30am on April 7.

Police believe he was assaulted around 3.20am.

During the assault, Dave was knocked to the ground and hit his head so hard on the concrete, the impact knocked both sides of his brain.

“He was taken to Tauranga Hospital where he was put into an induced coma and taken for a CT scan, where they discovered severe brain swelling and bleeds,” says a close friend of Dave.

“Due to the severity of his injuries, the doctors arranged for the Westpac Helicopter to transport Dave to Waikato Hospital so that he could be under the care of neurological specialists.”

At this time, he was unable to move the entire right side of his body, had only limited movement on his left side and was unable to speak.

In the days following he’s made steady progress, first improving the movement on his left side, then being able to stay awake for increasingly longer periods of time.

He’s now able to speak in short sentences, is eating on a special diet and is flexing the muscles on his right side.

Dave is being transferred to a rehabilitation facility in Auckland today, to continue working on his recovery with specialist for neurological injuries.”

To help with the ongoing medical costs not covered by ACC and insurance, a givealittle page has been set up.

“The money raised by this page will go towards Dave's medical costs not covered by ACC and insurance and to assist Dave’s family’s expenses as they support him through his recovery.

“Dave’s mum flew over from Australia, his children travelled up from Hastings and his sister, nieces and nephews travelled over from Tauranga to be with Dave.

"Any little bit towards Dave's recovery will be greatly appreciated."

People wanting to donate can do so by clicking the link here.

Police have arrested 24-year-old Ihaka Stock in relation to the assault.

Stock is facing a charge of reckless disregard to wound and possession of an offensive weapon.

He has pleaded not guilty to both charges.

Stock has been released on bail to a Hamilton address until his next court appearance on June 14.

Dave is one of the loveliest people I have met. I wish him a speedy recovery. Get well soon mate.