“I will bomb, smash and kill” 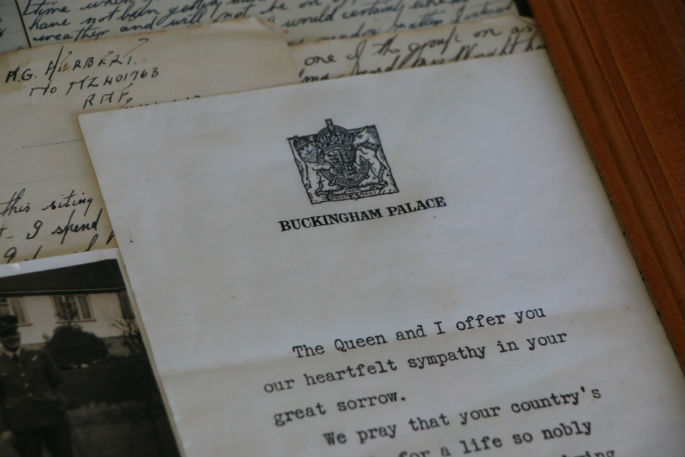 Remembering a young bomber pilot named Alexander George Herbert, who answered the call to serve and did not come home.

It is a solemn day of remembrance. When the sun comes up, heads are bowed, flags fly at half mast, soulful bugles sound The Last Post and volleys are fired.

ANZAC Day is in honour and celebration of all those who fought and died for our country.

This is the story of just one of them – a young bomber pilot named Alexander George Herbert, who answered the call to serve and did not come home.

His is one name on Hamilton’s Memorial Park cenotaph. Over the next two weeks, and with ANZAC Day looming, The Weekend Sun pieces together the war exploits of an uncelebrated hero, a son and a brother who fought and died for his country.

Flight Lieutenant Alexander George Herbert – Alex to his Mum – stood amongst 54 Blenheim bomber crews gathered for a briefing at RAF Oulton in Norfolk in the early hours of August 12, 1941.

Like most others, he could not believe what he was hearing.

Their mission was to strike the heavily defended Knapsack and Quadrath power stations just outside Cologne, with the bombers required to fly 250 miles over enemy territory in broad daylight without a fighter escort. It was an undertaking described as “suicidal”.

A Wing Commander at the briefing said it was the only time in his life he saw fellow aircrew grey in the face and shaking. Later that same day, the premonition would play out. The New Zealand pilot was dead. Officially recorded as “killed on air operations”, his Blenheim bomber was shot down by German fighter planes over the Netherlands on the run home.

As the news was being processed at his home base of RAF Upwood in Cambridgeshire, a letter arrived from New Zealand. It contained a poem by his mother Eva. “To My Son,” it read, hastily composed and scribbled in pencil on the back of an order of service for a wedding. Perhaps, at that moment, it was what Eva Herbert was wishing for her boy.

“It is just 18 months since you sailed across the sea, and how we wish you home again, Reg, Dad and Me.”

The raid was described by the Daily Telegraph in London as “the RAF’s most audacious and dangerous low-level bombing raid”.

“Audacious?” questions Gary McSweeney. “In other words it was the most stupid bloody air raid ever carried out.”

Gary’s not related to Alexander Herbert, but all of the airman’s personal documents, including his war letters to and from home, ended up in his possession.

It’s complicated. Alex’s father owned Herbert’s Bakery in Hamilton. When Alex was killed, his brother Reg inherited everything. Through a relationship Reg was involved in, one man’s war encapsulated in letters, photos and a poem was passed down to Gary McSweeney’s stepmother.

“Oh Alex how we miss you, and wish you home again, but know you have great work to do, in your great big Blenheim plane.”

“We were cleaning out her house after she died and there were all these papers and letter,” explains Gary. Although distanced from the man, he didn’t want to see the documents end up in landfill. He thought they should be saved and seen, so he mounted a selection in a 50-by-45 centimeter frame and handed them to the library boys at Classic Flyers.

“Documents like these deteriorate if they’re not properly cared for,” says George Pocock from the museum library. “The framed collage would have to be kept out of the light, and therefore out of sight.” And so it was left to The Weekend Sun to tell the story of the picture frame.