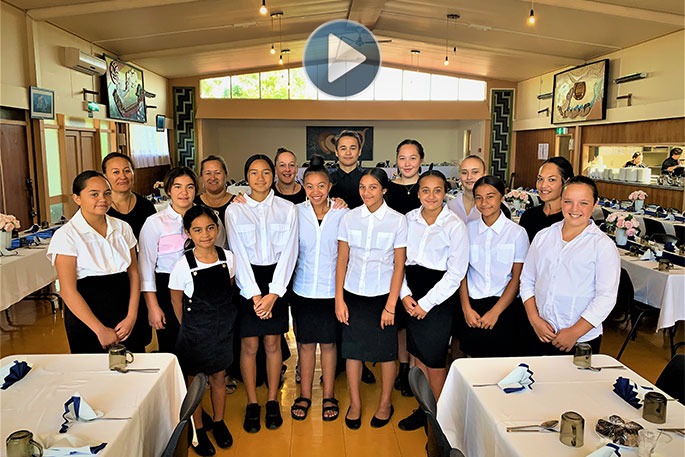 The team of waitresses carrying on the tradition of waiting on tables that their mothers and grandmothers have done before them at the Poukai at the Huria Marae.

The Maori king and more than 400 people attended the annual Poukai at Huria Marae recently. This is the 61st year that the marae has hosted the event.

Flags were hoisted at dawn, and Tūheitia Paki and his wife Makau Ariki Atawhai, along with a large contingent of visitors, mostly from the Waikato were ceremonially welcomed onto the marae at 10am for a day of speeches, performances, music and a large banquet.

Since the 1880s, during the reign of King Tāwhiao, the marae affiliated to the Kīngitanga have been held together by traditions such as the Poukai, an annual circuit of visits by the king that includes feasting and cultural performances. Started in 1885 by King Tāwhiao at the Whatiwhatihoe Marae, it was intended for te pouaru, te rawakore and te whanau pani (the widowed, the destitute and the bereaved).

Pou relates to a gathering, and kai is about food and a place to come together as one. Poukai is about remembering those who have passed on, eating together, and dining with the head of the Kingitangi movement.

Preparations at Huria marae began days before with one of the key components preparing the large feast. On Saturday, the day of the Poukai there were about 20 people busy in the kitchen, another ten outside, and more looking after the hangi. 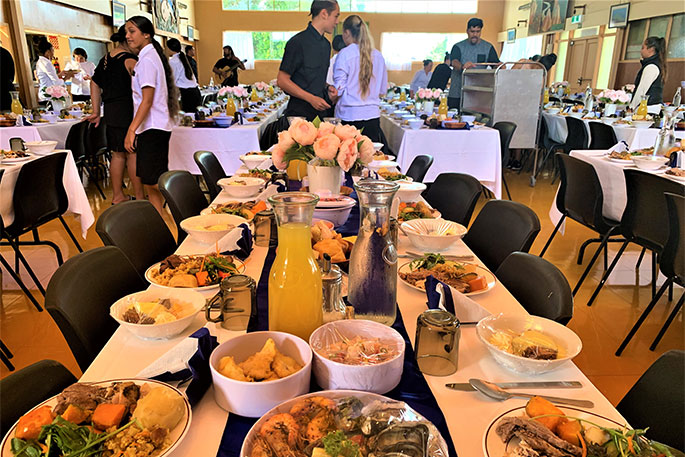 Tables set ready for guests to be seated.

“We’re feeding four hundred,” says Charlie Rahiri, who oversees the banquet. “Two hundred and sixty are seated in the dining room, and we’ll have an overflow. Everything’s getting prepped. Two pigs, two sheep, a beef and a whole lot of seafood.”

Charlie works for Te Puni Kokiri, the Government ministry for Maori Development, and is one of the senior advisers in the Bay of Plenty region.

“My focus is on marae revitalisation and housing,” says Charlie. “And I’ve been running the kitchen here for the Poukai for 11 years.

“I changed it when I first came in, because there was unhealthy stuff, so we flipped it around, and made the unhealthy stuff the option, and the healthy the main. It took a couple of years for everyone to get used to it but they did. No more fizzy drinks.

“The hangi is getting prepared up the road, probably one of the biggest hangi pits in Tauranga.” 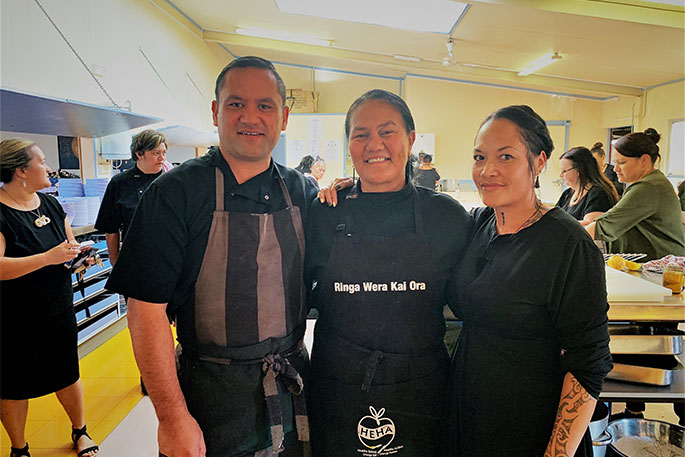 Charles Rahiri, Kura Martin and Natalie Rikirangi in the kitchen at Huria Marae.

There are four separate preparation teams in the kitchen, taking care of the king’s menu, the seafood, the meat, and Charlie overseeing the rest.

“The king has a separate menu,” says Charlie. “He’s going to many Poukai around the Waikato, so he probably has hangi all the time.

“I’m just the one to bring it all together and make sure it’s on time and on budget. We started on Wednesday with the cleaning of the marae, mowing the lawns, painting, making it look nice, prepping the food. We probably won’t finish our part until Tuesday.”

Kylie Willison is in the dining room overseeing the table settings with about 15 girls helping.

“The mahi began on Friday,” says Kylie. “Today the girls will be waiting on all our manuhiri - our visitors that come onto the marae. Most of them are from Tainui waka.

“The girls will make sure our visitors have enough kai on their tables, and cup of teas. After the kai is finished they’ll clear the dishes away and then reset to give our whanau from here kai afterwards.” 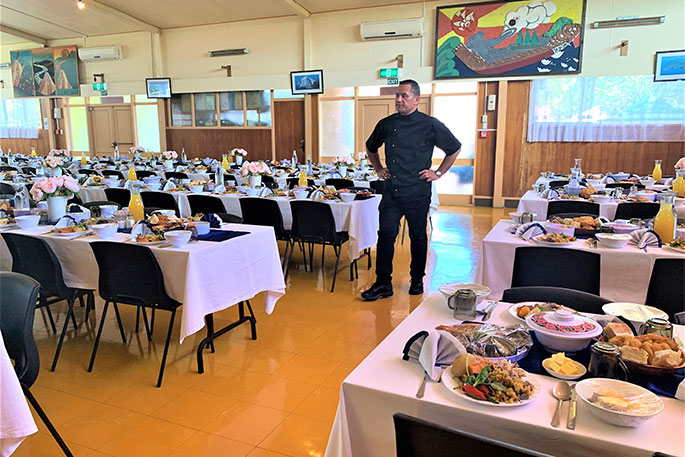 Charlie Rahiri doing a last minute check of the table settings just before guests are seated.

It’s a long day for the girls, who are following in the tradition set by their mothers, aunties and grandmothers before them.

“We’re very grateful to have them,” says Kylie. “There’s generations of children that have been brought up on the marae here and have learned to do it as their parents and grandparents have done it before them.

“This is our 61st year of holding the Poukai, so it’s a very special thing and we look forward to it every year. It’s probably the biggest event our marae holds and prepares for.” 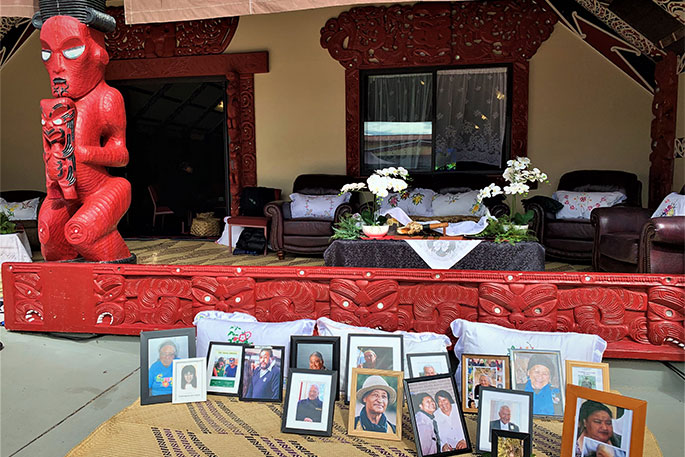 Photos of those who have died during the previous year on display.

There are only a couple of maraes that host Poukai outside of Waikato.

Dr Maharaia Winiata, who lived from 1912 – 1960 was instrumental in bringing Poukai to Huria, through his friendship with Princess Te Puea Herangi (1883 – 1952). The Huria meeting house Tamateapokaiwhenua was opened in 1956 by Kingi Koroki, who had visited Tauranga several times. Tragically, Maharaia died in 1960 aged 47 years old at the close of the Poukai at Huria Marae and is buried next to the meeting house.

The Māori King Movement or Kīngitanga is a movement that arose among some of the Māori tribes of New Zealand in the central North Island in the 1850s, to establish a role similar in status to that of the monarch of the British colonists, as a way of halting the alienation of Māori land. The Māori monarch operates in a non-constitutional capacity with no legal or judicial power within the New Zealand government. Reigning monarchs retain the position of paramount chief of several tribes (iwi) and wield some power over these, especially within Tainui where the monarchy is almost exclusively associated.

The current Māori monarch, Tūheitia Paki, was elected in 2006 and his official residence is Tūrongo House at Tūrangawaewae marae in Ngāruawāhia. Tūheitia is the seventh monarch since the position was created and is the continuation of a dynasty that reaches back to the inaugural king, Pōtatau Te Wherowhero.

The Poukai is the annual series of visits by the Māori King to Marae around and beyond the Tainui region, a tradition that dates back to the 19th century.

Poukai were established by the second Māori King, Tāwhiao, who said “Kua whakatūria e ahau tēnei kaupapa hei whāngai i te pouaru, te pani me te rawakore, he kuaha whānui kua puare ki te puna tangata me te puna kai” - “I have instituted this gathering to feed the widowed, the bereaved and the destitute, it is a doorway that has been opened to the multitudes of people and the bounty of food.” 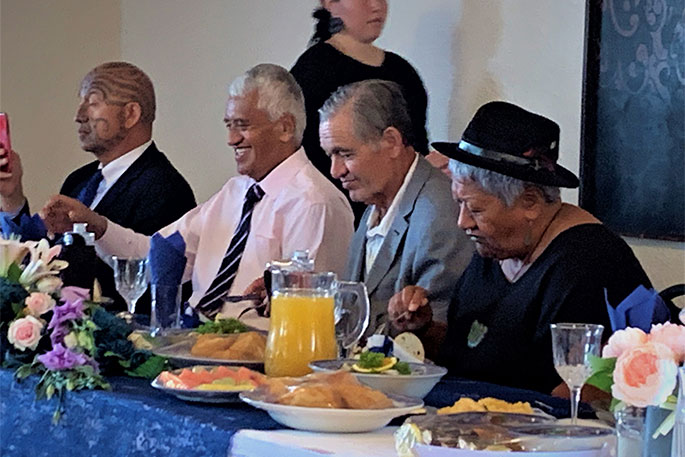 The Maori king Tūheitia Paki and his wife Makau Ariki Atawhai at the head table.

A unique element of the Poukai is the focus on te pani, te pouaru and te rawakore. Photographs of those who passed away during the previous year are placed at the front of the meeting house for viewing during the Poukai.

Poukai are also occasions of great celebration where entire iwi (tribes) and hapū (sub-tribe) come together to prepare a great hākari (feast).

“We’re lucky to have the Poukai here,” says Kylie, “And it goes back to the relationship that Maharaia had with Te Puea Herangi in the past. It’s something I look forward to every year.”

From March, buses from the Waikato head to the maraes, mostly on weekends. The king’s band plays as the large group walks on to the marae at 10am and again after the day finishes at 4pm.