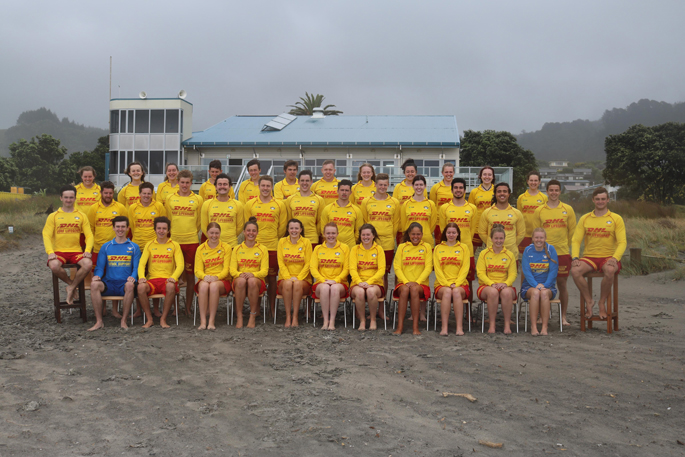 The surf lifeguards and patrol members from Waihi Beach Lifeguard Service, outside their clubrooms, on the first day of patrols last year. Image: Supplied.

Volunteer surf lifeguards from Waihi Beach Lifeguard Service have been awarded with the national BP Rescue of the Month award for plucking a man from the surf who had suffered a stroke while surfing in February.

Their response in this rescue required a multitude of skills including the ability to notice someone in distress in the water, paddling a patient back to shore, providing first aid and coordinating an emergency response including an ambulance handover.

Fortunately, the club was full of surf lifeguards setting up for the BP IRB North Island Championships happening that weekend, when Nathaniel Palla and former lifeguard Thomas Carter noticed something was wrong with another surfer. Upon assessment, Nathaniel and Thomas knew he needed immediate attention.

They paddled the patient back to shore behind another lifeguard, Duncan Gibson, who rushed back to shore, raised the alarm at the beach and started arranging for more help.

Eastern Region Lifesaving Manager, Chase Cahalane says without the intervention of the lifeguards from Waihi Beach, the outcome could have been tragic.

“We’re incredibly proud of the efforts by this group of lifeguards, who undoubtedly avoided a very tragic outcome for this patient,” he says.

“They did an excellent job and we’d like to thank them for everything they did on that day.

“Rescues aren’t all about getting beachgoers out of trouble in the water. Sometimes it is about lifeguards recognising someone in trouble and giving them the best care possible, which often includes time-critical, high quality first-aid like this case.”

At the time of the rescue, the patient’s mother sent a note to the surf lifeguards involved to thank them and said that thanks to their expertise, he was safely transported to hospital where he was slowly starting to mend.

“Last Friday your team saved my son’s life. He was surfing at the beach when he had a stroke. Although you were not officially on duty, someone noticed him lying on his board and thought they should take a look,” she says.

“He is a Dad with a loving wife and four wonderful children. No words can express all what I want to say, so I will simply say - THANK YOU - from a very very grateful mother.”

“Congratulations to the volunteer surf lifeguards from Waihi Beach for an awesome team effort during this recent rescue.

“It’s a great example of the work Surf Life Saving New Zealand and their member clubs do year round to help save the lives of thousands of people as well as educate people about how to stay safe on our beaches,” she says.

For their efforts, Waihi Beach LS get a $500 BP gift-card to help with running costs, and further recognition of this “amazing rescue”.

Papamoa SLSC managed to secure second to Waihi Beach LS and with that, they get a $300 BP gift card for helping a patient who suffered a physical injury in the water.

Rounding out the top three rescues in February is Kariaotahi SLSC, near Waiuku, who take home $200 of BP vouchers for their club for their efforts in a first aid response, while also rescuing 10 people from a rip current.

SLSNZ National Lifesaving Manager, Allan Mundy, says the variety of skills used in each of the top three awards this month goes to show the versatile and high-quality skill of surf lifeguards and how much they help their community.

“This month we’ve seen Surf Life Saving Clubs recognised for helping people in a multitude of different scenarios, all of which could have ended tragically without the intervention of surf lifeguards.

“From a medical event, to a physical injury in the water, and a mass rescue of people from a rip current, they did it all this month,” he says.

“Everyone at SLSNZ is incredibly proud of all our volunteer surf lifeguards and can’t thank them enough for their time, dedication and care in helping people around Aotearoa.”

The final winner of BP Rescue of the Month for this current summer season will be announced later in April.