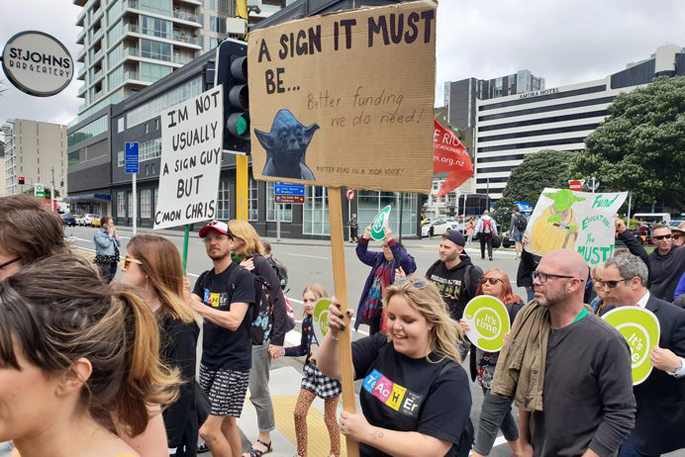 Primary teachers and principals in Wellington hold a rally on the last day of a week of strike action around the country in November last year. Photo: RNZ / John Gerritsen

Primary school teachers and principals have voted to reject the latest offer from the Ministry of Education.

The New Zealand Educational Institute (NZEI) is locked in a year-long pay dispute with the Education Ministry.

It said today the latest offer to settle their collective agreements was "overwhelmingly rejected".

Union president Lynda Stuart says significant disruption could happen next term if the government did not focus on finding a solution quickly.

Paid union meetings will happen early next month and if there's no progress by then the proposal is to vote on strike action on May 29, the union say.

Between May 15 and the strike date teachers would also work to rule, meaning only working within 8.00am to 5.00pm Monday through Friday.

Teachers and principals voted last week on offers the NZEI said differ little from those they have previously rejected. The government has insisted it will not increase the value of its offers any further.

Teachers have walked out of classrooms twice since August in rolling strikes to pursue their demands for a pay rise, smaller class sizes and more resources.

In November they went on strike after turning down an improved pay offer from the Ministry of Education.

That had included an increase to most teachers' pay by nine percent over three years, a new top of the pay scale from 2020, an a $500 lump sum for union members only. It increased spending by $129 million, taking the offer to almost $700 million over four years.

The Employment Relations Authority has slammed the teachers union's pay demands as "totally unrealistic" and has urged teachers to take the government's offer.

Last month secondary school teachers called off a nation-wide strike due to the Christchurch terror attacks and said it would decide its next steps after the April school holidays.

I am disappointed with the vote. If they as claimed got to such a poor pay situation why did they get so far behind. Was the National government so scary or teachers so gutless? Arguably the Labour coalition are a more worker aligned government and yet this situation puts a lot of pressure on a financial situation where so many catch ups in so many areas are required due to nine years of neglect. Surely the offer is a good start. I doubt the disruptions caused will get support from hard working parents for very long as everyone has pressures and would love wage rises that have been offered to teachers. Children and families require stability not uncertainty. Strike and feel public opinion turn in you if you continue to disrupt children and families .

....and, firstly sincere thanks to those who decided to temporarily call off the strike as a result of the Christchurch shootings which have rocked our world forever..... however........it comes as no surprise that teachers have voted to continue such action. To continually disrupt family life is at least unhelpful, at worst, well you decide. The top offered (by the MOE) scale of teachers salary is set to exceed that of Nursing staff who actually work all year and not just 9 months for similar reward...we would ALL like that I am sure, and to suggest ’working to rule’...who’s rule?...many have well gone shortly after the bell goes...don’t see much difference there!....so please get serious, or we will be moving quickly towards automated teaching well before it inevitably happens anyway...you can help by winding in your necks and maybe getting back some of the community respect lost in recent years..............