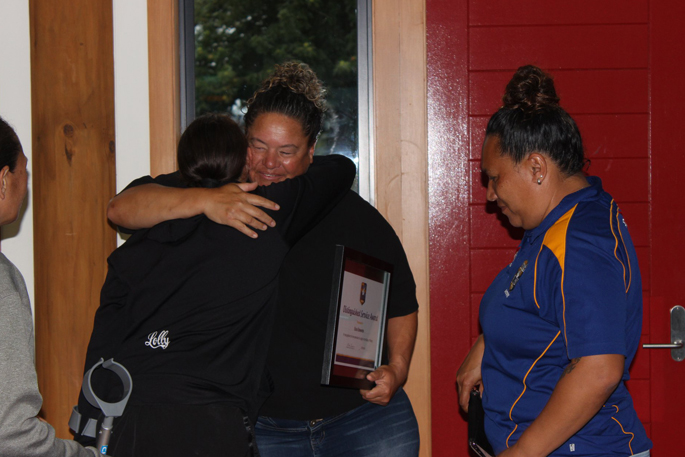 The Bay of Plenty Rugby Union has recognised former Black Fern Exia Edwards for her services to rugby with a Distinguished Service Award.

Exia is one of the most successful players in the Bay of Plenty for both men and women, with an impressive three Rugby World Cup medals.

The award was presented to Exia at the Union’s Annual General Meeting held at Te Kura Whare, in Taneatua on Wednesday, March 27.

“The Union is committed to moving the meeting around the region as well as showing our strong links to our Maori culture, that’s why we chose Taneatua for this year’s meeting.” Says Bay of Plenty Rugby chief executive Mike Rogers.

Outgoing Bay of Plenty Rugby Union President Phil Barnett says with the venue being the tribal base of Ngai Tuhoe, presenting Exia with her award in front of her family and friends was the perfect location.

Exia, who played two seasons for the Opotiki Men’s senior reserves team was also acknowledge by the large Opotiki contingent who attended the event with a rousing haka.

It was also announced at the AGM Steve Axtens was appointed to the Vice President role with the Union. Steve brings a wealth of rugby experience to the position having played for Bay of Plenty, and Counties Manukau as well as three games for the New Zealand Divisional Team. Steve was also a key player for the Reporoa Club during his playing days.

The Bay of Plenty Rugby Union has appointed two new members to the board, Scott Kahle and Craig Sandlant.

Scott will join the Union as an Independent Director. Bay of Plenty Rugby Union chairman, Paul Owen says Scott will bring a vast experience in business and marketing acumen to the Board make-up. Scott is currently, Head of Alliances & Industry Partnerships at FMG (Farmers Mutual Group).

Craig will take up one of the two Rugby Director positions. Supported by Tauranga Sports and Mount Maunganui Rugby Clubs, Craig has been involved in community rugby for a number of years, firstly through the junior rugby system and more recently with Tauranga Sports senior teams and committee.

Craig will also take up the portfolio of chairman of the Club Working Group, who are responsible for Club Rugby in the province.

Bay of Rugby chairman, Paul Owen reported the Union had another successful year of rugby in the region highlighted by the Under-19 team winning the Provincial title at the Jock Hobbs National U19 Tournament.

He says the further growth and strengthening of the women’s game and the overall increases in playing, coaching and referee numbers is also positive.

Mike reported on another successful financial result, the 8th consecutive year where a surplus has been posted.