Two years on from Edgecumbe floods 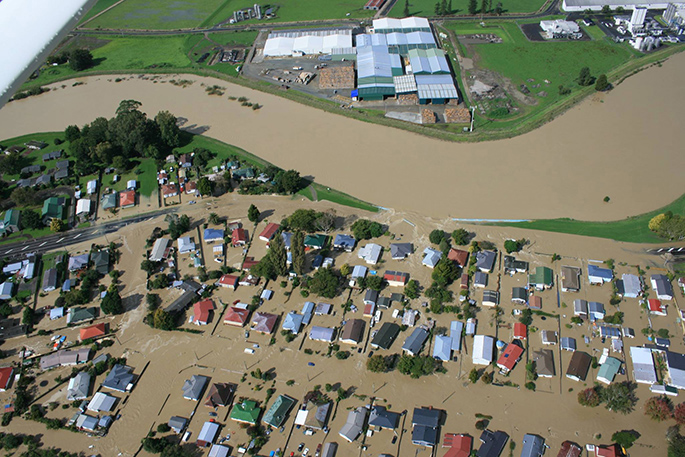 The Edgecumbe township was flooded back in April 2017. File Photo.

On the morning of April 6, 2017, floodwaters rushed through the Eastern Bay of Plenty township of Edgecumbe and surrounding rural areas after the Rangitaiki River burst, breaching its stopbank that protected the town.

More than 180mm of heavy rain had fallen in the two days prior as Cyclone Debbie passed through, and when the township flooded rapidly it damaged more than 300 homes. Luckily, no lives were lost.

By mid-September 2017, the majority of silt and debris had been cleared for those affected by the floods.

The Earthquake Commission had cleared silt and debris for 251 properties in Edgecumbe, which was 92 percent of all claims it received following the April 2017 flood.

General manager customer and claims Trish Keith said back in September 2017, that EQC’s response to the Edgecumbe flood required a different approach than EQC would typically take following such a natural disaster.

“The government asked EQC to clear silt and debris from underneath and around people’s properties and we have managed this work with the local councils and five contracting companies.

“EQC is in the process of scheduling the work for 11 of the remaining 21 properties. In addition, we will finalise the claims for the other 10 homeowners, who have been issued with a Dangerous Building Notice or a ‘red sticker’, once their settlement with the local council has been agreed.”

Trish says that EQC’s response team was on the ground immediately after the flood occurred.

Barbara Dempsey, who served as the Whakatane District Recovery Manager from late-2017 says community members ‘have overcome many hardships to rebuild their lives’.

“Over 98 percent of the flood-damaged homes have been repaired and reoccupied and thanks to the Eastern Bay Energy Trust’s contribution to home insulation, many homes are now warmer and healthier than they were previously,” she says.

“The recovery process was assisted by a wide range of local community groups, many volunteers and larger external organisations, which all had the same objective – to assist our flood-affected communities to recover.

“The Recovery Navigators also played a crucial role, helping people get the information and support services they needed to be able to rebuild their homes and their lives.”

To assist the Edgecumbe community’s transition from recovery to longer-term development, the Edgecumbe Collective (involving representation from approximately 12 local community groups and organisations) was formed in mid-2018.

The Collective has been responsible for developing the ‘Edgecumbe Community Plan’, assisted by Council-appointed Coordinator Vicky Richards.

She says the significant achievements of the Edgecumbe Collective and the local community over the past few months have included:

Establishing a town theme - Edgecumbe ‘Heart of the Rangitāiki Plains’;

Developing and distributing the “Edgecumbe Collective Newsletter”, which has been supported by Whakatāne District Council and Bay of Plenty Regional Council;

Working with the Regional Council to shape the development of ‘Papataonga’ - the green space named by red zone residents. The completed design for this reflective community space will be available for the community to consider in the coming weeks;

Many community groups combining to hold a wide range of community activities and events.

Vicky says the second anniversary of the flood events is a good opportunity to “stop and reflect upon how much we have achieved within our communities over the last two years. So just imagine what we can achieve in the next two years.”