New Zealand Finn sailors to the fore in Palma 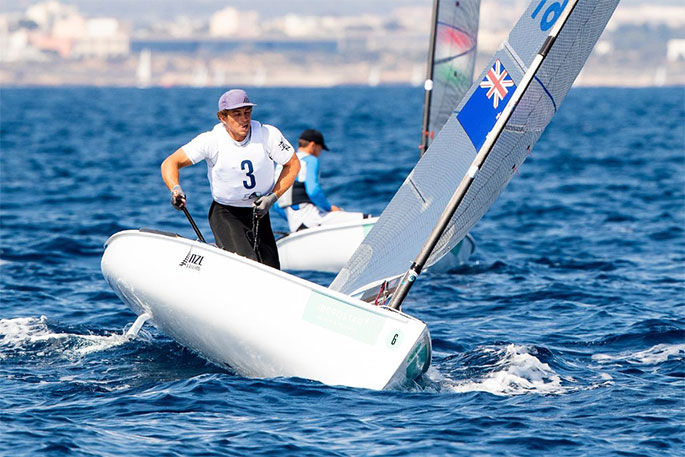 Andy Maloney and Josh Junior are aiming for a one-two finish at the Princess Sofia Regatta in Palma and the Kiwi pair have made a strong start after two days of racing.

Maloney leads the Finn class after winning both of his races today sailed in a light onshore breeze - he's now won three out of four - but Junior is only six points behind in third with two wins of his own.

Elsewhere Alex Maloney and Molly Meech lead the 49erFX fleet heading into gold fleet racing and the Nacra 17 pair of Gemma Jones and Jason Saunders are still second. Peter Burling and Blair Tuke didn't have the return to international competition they might have liked, but finished the day by winning the third race and are 35th overall in the record-sized 49er fleet.

Andy Maloney and Junior are working very closely together, with the aim of giving whoever goes to the Olympics the best chance of success in Tokyo next year. The pair have made an impressive start to the first major regatta of the European season, sitting on top of the 86-boat Finn fleet.

"We are aiming to have us both first and second at the end of the regatta but there is a long way to go," says Maloney.

Junior added: "It's awesome Andy and I have both had good starts to the regatta. It was a pretty cool feeling after I had won my race to look back and see Andy winning his too. There is obviously a long way to go and we will just continue to treat every day the same and see where we end up.

"We haven't raced a lot of these guys since the world champs in Aarhus [last August], so it's a great opportunity to check in and it will be interesting to see how the rest of the week develops."

Alex Maloney and Molly Meech have already tested the international waters this year, finishing second at the World Cup Series regatta in Miami, and they're in a good position after six qualifying races in the 49erFX. The pair have put together a series of solid scores, with three results in the top three and all six inside the top 10.

"The starts are really tricky here so we have been pushing them quite hard and it has been paying off which has been nice to see," says Meech.

"We had three pretty solid races today so it was nice to come away with three keepers.

"The plan is to keep things pretty consistent. We have plenty more racing to come over the next couple of days when we go into gold fleet and that's going to be really cool to be racing against all the top girls."

It's extremely tight in the large 49er fleet, which failed to get any races in yesterday due to a lack of wind. Only 21 points separate the top 50 boats, meaning it's still anyone's regatta.

Logan Dunning Beck and Oscar Gunn are the best placed of the Kiwis in 16th, with Josh Poresbki and Trent Rippey 21st, Isaac McHardie and William McKenzie 25th and Burling and Tuke 35th.

Burling and Tuke made a slow start to their first international 49er regatta since winning gold at the Rio Olympics, opening up with an 18th and 23rd, but recovered well to win their last race of the day.

"The first two races weren't good for us at all," says Tuke.

"The first race was going pretty well but we hit the mark and dropped back from the top five. The second race was just a bad race but we managed to get it back a little bit for the last race which pulled the day back.

"It was a pretty average start for us but it was nice to get our first day under our belts."

Results after day 2 of the Princess Sofia Regatta in Palma overnight (NZ time):