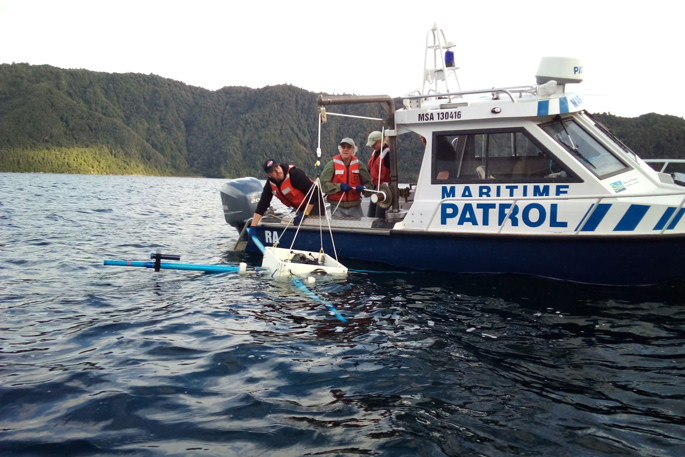 Scientists deploy one of the instruments on loan from Scripps Institution of Oceanography in Lake Okataina as part of a geophysical survey of four lakes in the Rotorua region.

Scientists are undertaking a novel electromagnetic survey of lakes in the Rotorua region to build a more complete picture of geothermal resources and volcanic hazards under the Bay of Plenty.

The survey is a joint project involving GNS Science and Bay of Plenty Regional Council, with the instruments loaned by Scripps Institution of Oceanography in San Diego.

It involves a technique called magnetotellurics - MT for short - that will see scientists collecting geophysical data in four of the Te Arawa/Rotorua lakes to help build a picture of the sub-surface.

The project has the support of Te Arawa Lakes Trust and Mokoia Island Trust.

It’s the first time this technique, which measures low frequency electromagnetic waves in the Earth’s crust, has been used in New Zealand lakes.

It enables scientists to build a picture of where geothermal fluids may be present deep within the earth.

It makes use of the fact that rocks that are hot and contain geothermal fluids are more conductive to electricity than normal rocks.

Scientists will collect data at lakes Rotorua, Tarawera, Okataina, and Rotoiti. They will also take their equipment to Mokoia Island to give more complete coverage of Lake Rotorua.

Project leader, of GNS Science Ted Bertrand, says to get a clear picture of the Earth’s crust in this part of the North Island scientists needed continuous data coverage across the region.

“We have taken hundreds of measurements on land using this technique, but at present we have holes in our data where the lakes are.

“The lake measurements will provide more complete coverage so we can better determine where geothermal fluids and partly melted rocks are located in the crust.”

“For the Regional Council, our aim is to increase our understanding of the wider geothermal resource and volcanic hazard in the region surrounding Rotorua.”

The measurements are being taken by lowering specialist instruments to the lakebed of each lake and leaving them in place for two days to collect data. Initial results are expected at the end of this year.

Results will augment existing data which have already been used for the sustainable management of geothermal fields, for exploration of new deep geothermal resources, and for management of volcanic hazards.

Following the project, a hui will be arranged in Rotorua where scientists will share preliminary findings with Te Arawa and the wider community.