Maketu Volunteer Coastguard amongst the best 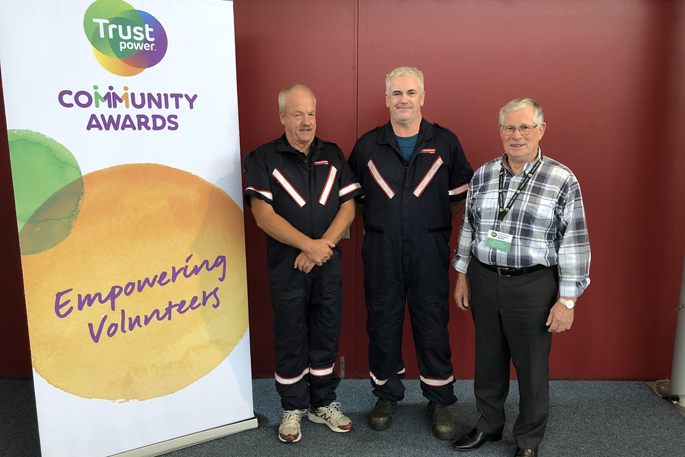 Maketu Volunteer Coastguard have reaped the benefits of a weekend spent amongst likeminded volunteers from around New Zealand at the Trustpower National Community Awards.

Geoff Oliver and Ian Hurlock represented the group, with Mayor Garry Webber on hand to support the team over the weekend. These representatives took their community project head to head with the country’s best and brightest volunteer groups and projects on a national stage, full of friendly competition.

Trustpower Community and Communications Advisor Abbie Siely says although the Western Bay of Plenty District group did not come away as award recipients, they made a strong impression on the audience.

“Geoff and Ian delivered an impactful presentation that really brought home the crucial role that Coastguard plays in keeping us safe at sea. It was a real pleasure to have them join us to share in the weekend,” says Abbie.

Amongst the groups there were 27 competing for the title of National Supreme Winner, in amongst a weekend of connection, collaboration and inspiration.

The award winners were announced on Saturday evening (March 30) at an Awards Dinner, held at Mills Reef Winery.

The Whetū Mātaiata Award winner (the ‘rising star’ award for an up-and-coming group), went to Under the Stars from Tauranga, and the winner of the inaugural Trustpower Award was Uso Bike Ride from Porirua, representing the Wellington region.

In between a weekend of sight-seeing and networking, the Maketu Volunteer Coastguard volunteers gave an eight-minute presentation on what the group has achieved.

The groups were judged on their presentations, along with a 1000 word summary of the organisation, by their peers and a panel of independent judges including Rhodes Scholar and 2017 runner-up in the NZ Youth Volunteer of the Year Awards, Johann Go, co-founder of Good Neighbour, Cam Hill, GM of Tauranga Women’s Refuge, Hazel Hape, previous National Supreme Winner, Bruce Knight from the Edgecumbe Volunteer Fire Brigade, Chief Executive of Volunteering NZ, Dr Katie Bruce, General Manager of Exult, Rosie Julou, Trustpower GM of Customer Operations, Fiona Smith, and Trustpower Independent Director, Richard Aitken.