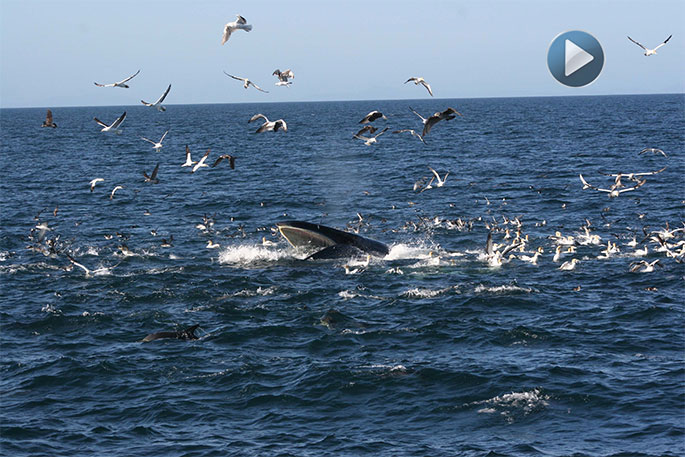 Genetic analysis of the poo of a population of Bryde’s whales that live year-round in the Hauraki Gulf shows the mammals are not very flexible in their eating habits.

University of Auckland researchers spent more than two years collecting poo and zooplankton samples from the Gulf, then used a DNA “barcode” approach to identify different types of prey found in the whale poo.

Associate Professor Rochelle Constantine from the University’s School of Biological Sciences says the results were surprising.

“We were surprised how strong the whales’ prey preferences were. We had thought they ate a sort of multi-species ‘plankton soup’ commonly found in the Gulf but they favoured a few specific types of plankton, typically found in patches.”

The research team identified 1,235 types of zooplankton but the whales preferred only a few of them; mostly krill-like shrimps, gelatinous salps, and copepods (small crustaceans).

“We are now going to work out how the whales they find these prey patches, but what we don’t yet know is whether they use smell - no-one knows whether baleen whales have a sense of smell.”
This study is novel, she says, because new genetic techniques were used to analyse both the whale poo and the potential food available at the same time.

“Many species of whales target a single prey species but Bryde’s whales’ diet is more complicated than that. It’s important to discover which type of plankton these whales are eating because we know climate change is affecting plankton productivity.

“If the type of prey the whales eat becomes scarce in the Gulf, then the whales may move away. This has happened elsewhere in the world.”

“They were not eating what was seasonally available but had a clear preference for only a few types of zooplankton and occasionally fish.”

While collecting samples of whale poo took some time, the team is grateful for the valuable help they got from some of their study collaborators.

“Auckland Whale and Dolphin Safari crews collected many of the samples and that’s been really helpful, apparently poop-scooping was a bit of a novelty for the passengers,” Associate Professor Rochelle Constantine says.

The team used techniques and data from other research projects to carry out the genetic analysis, including a terrestrial eDNA study by Professor Richard Newcomb from Plant and Food Research and the University of Auckland, and Dr John Zeldis's group at NIWA who are carrying out a long-term study of zooplankton communities.

This latest research was funded by the University of Auckland and the Hauraki Gulf Marine Mammal Fund, Department of Conservation.