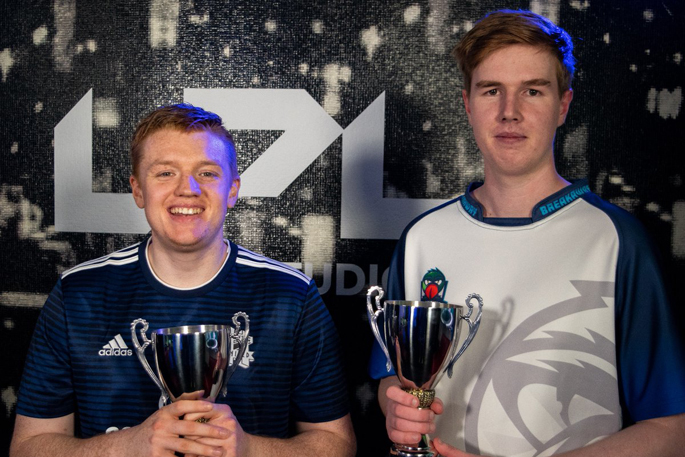 After becoming the inaugural winners of the New Zealand Football FIFA 19 National Championship, two young Kiwis are set for the trip of a lifetime after booking themselves a prestigious place at the FIFA eNations Cup in London next month.

Campbell Knowles, 20, from Tauranga, and Harry Blackmore, 23, from Long Bay on Auckland’s North Shore, will be flown to the English capital all expenses paid to take on the best exponents of FIFA 19, the industry-leading football simulation video game after holding off the challenges of hundreds of other gamers to become the first-ever New Zealand champions.

“It’s pretty cool, there’s never been an official award until now but I’ve always seen myself as representing New Zealand and as our best player on the national stage,” says Harry, who competes under the alias of Hashtag Honey Badger.

Harry will be joined in London by Campbell, whose alias is Breakaway Airbrn, after the pair claimed their hard-earned titles last night in the grand finals of the FIFA 19 National Championship at the Let’s Play Live studios, located inside Auckland’s iconic Sky Tower.

“It feels amazing. I’ve been working for the last three years to do this well so to finally get over the line is amazing,” Campbell says.

The eventual champions came through a gruelling online qualification process before taking their place in the finals, which pitted Honey Badger against Joshua Matthew King, or JMKKing, on PlayStation 4 while Airbrn faced Sharhat Singh, who plays under the moniker of gunners4ever, on Xbox One.

Both runners-up gave good accounts of themselves, pushing the favourites hard in a best-of-three format.

Honey Badger surprisingly went two goals down in the first match but recovered to triumph 5-2 before a 3-2 win gave him the PlayStation title.

Airbrn also did it the hard way, falling to a shock 4-3 loss before recovering to win 2-0 and 6-0 to become the Xbox champion.

Both can’t wait to officially fly the flag for New Zealand at the FIFA eNations Cup, which takes place on 13-14 April and brings the best gamers from 20 countries together.

The Kiwis have been drawn in Group B and will meet Spain, USA, Mexico and China PR.

“To be on the world stage representing New Zealand is not only an honour, it’s an amazing achievement,” says Campbell.
“There’s so many amazing people in this country who play this game and to be the one representing your whole country is amazing.”

In addition to national pride, there will be plenty to play for in London as some hefty prize money is on offer – the winners will receive their share of US $40,000 – while valuable FIFA Global Series points are also up for grabs. Both are of vital importance to Harry in particular as his livelihood depends on it.

Now based in England, he is a full-time professional FIFA 19 gamer and represents Hashtag United, a football and eSports club that has a massive online following.

“It was a long journey to come back for two games of FIFA but I had to do it, this tournament is a massive event and it’s an honour to say I’m the New Zealand champion – it’s definitely something to add to the bio,” he says.

“Last year was my first of making a lot of events and travelling all over the world. It’s a crazy career but I absolutely love it so hopefully I can do it for as long as I can.”