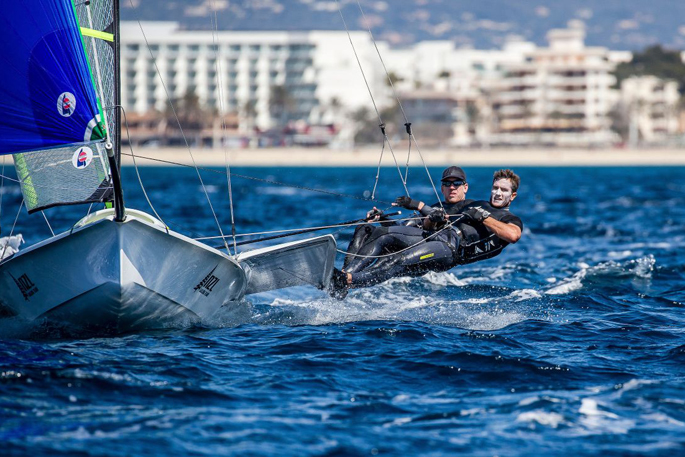 Peter Burling and Blair Tuke are competing at the Princess Sofia regatta in Spain this week.

Tauranga born and raised sailor Peter Burling and his partner Blair Tuke will be under the spotlight at this week's Princess Sofia regatta in Palma, Spain.

The event marks the pair's first international regatta in the 49er since winning gold at the 2016 Rio Olympics. The landscape has changed a little since then, with rivals having come and gone, which is why there will be so much interest in how Peter and Blair fare in Palma.

"It would be pretty natural for people to want to knock us off in that first big regatta back.” Says Blair.

"For us, it's about doing the things we can control well and sailing the boat really well. If we do that, we should be somewhere towards the front. You can only do the best you can. That's what we did last time and it worked alright for us."

It went better than alright, Peter and Blair famously won every major regatta between the London and Rio Olympics, including four 49er world titles, and their margin of victory at the Rio Olympics (43 points) was the most in any class at the Olympics in more than 50 years.

The pair announced last August their intention to try to win gold at next year's Tokyo Olympics and started training in October. They won their first regatta back, February's Oceanbridge NZL Sailing Regatta, and were second at the 49er national championships soon after.

They've returned into a strong local 49er scene, and have been working closely with three other New Zealand teams who all have Olympic ambitions of their own. They all train together and there's also a talent pool of promising skiff sailors below this that Peter and Blair have been helping.

"We are aware that the better the New Zealand group gets as a whole, the better we will be," Blair says.

"When we first started sailing the 49er 10 years ago, there were only two or three boats.

"To see the level of people sailing them in New Zealand and the depth of the fleet is pretty exciting for us because we know we have been a part of that. It's been an awesome summer and a great bunch of guys we have been sailing with. It's really helped us get back to a high level quickly.

"The 49er is always good fun. For Pete and I, the last two-and-a-half years we have been sailing in much bigger teams in the America's Cup and Volvo Ocean Race. It's neat to get back into the 49er. You pull the sails up yourself, launch the boat and just go sailing."

As many as 106 49ers will line up at the Princess Sofia regatta, which is being touted as the largest 49er fleet seen at an international regatta. The event itself is massive, with more than 850 boats and 1200 sailors from 68 nations in the 10 Olympic classes. Racing gets under way for the Olympic classes on Monday night (NZ time).

Most of New Zealand's top sailors will be competing, which marks the start of an important international season with Tokyo's countdown clock having already ticked under 500 days to go until the Olympics.

"It isn't that much time and we have to be very clinical with everything we do, and that's why getting off to a good start in these first couple of events will be important to us," Blair says.

"It's exciting. That time pressure, and knowing you have to be good pretty soon is good for us because we often go better when we're up against it. We're looking forward to it."