Try your hand, or foot, at FootGolf 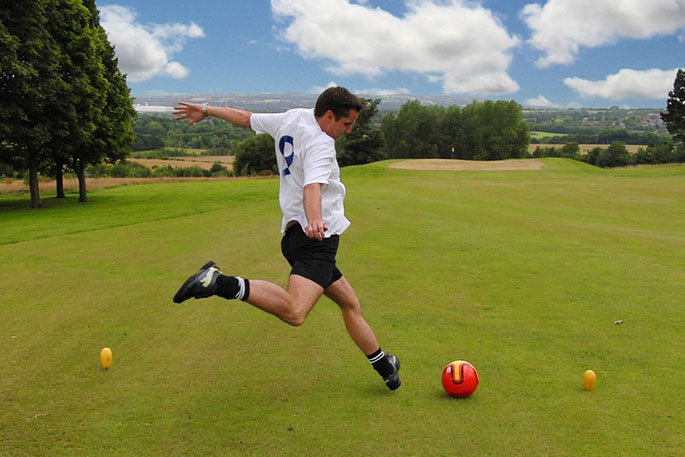 FootGolf is teeing or kicking off today at 3pm at the Otumoetai Golf Club.

Club Manager Kevin Steward says the club is interested to see how the new sport will appeal to the local community, so are holding an event this afternoon.

“It’s quite big in the UK,” says Kevin. “We’ve decided to introduce it here as part of our facilities, to provide it as another amenity for the Tauranga area.”

FootGolf is played and scored the same way as golf, except you are kicking a football into a larger hole instead of hitting it with a golf club. As with golf, the lower the score, the better.
“We’ve had a pretty good response from the local football clubs. We’ve set up an association with the Otumoetai Football Club which has over 1000 members, and we’ve set up an 18-hole course at the Otumoetai Golf Club.”

FootGolf is, according to the NZ FootGolf Association, the fastest growing new sport in the world with 500+ courses operating in the USA; it’s also huge in Europe and Great Britain. As a game it is played throughout the world in many different forms, but as a sport, it is regulated by the Federation for International FootGolf (FIFG).

Since 2015, FootGolf courses have increased throughout New Zealand, with 11 courses around the North Island and one in the South Island.

“We went across to the course at Hukanui, outside of Hamilton,” says Kevin. “It’s been a great addition for them, so hopefully it will work for us being right in the middle of the city.

“Some of the smaller golf clubs in the UK have actually closed their golf facilities just to handle FootGolf because it’s so popular in the UK, so we thought we’d introduce it here and see.

“We think it’s a great addition to the Tauranga area and we see it going through all ages. It’s not one age group thing. Kids can play it and adults can play it.

“We find on corporate days that a lot of people can’t hit a golf ball with a golf club but we think most people can kick things, so we think it will take off as a corporate activity as well.”

“We’re not a registered member of New Zealand FootGolf yet,” says Kevin. “We plan to eventually be members, but at the moment we’re just seeing how it will take off in the area.

“Today is an experiment to see what sort of reaction we get from it. Everything is very positive from all those who are involved in the football fraternity so it’s quite interesting.”

The public are welcome to come along and watch or participate in FootGolf this afternoon, Sunday March 24 at 3pm at the Otumoetai Golf Club at 25 Bureta Rd, Bureta, Tauranga