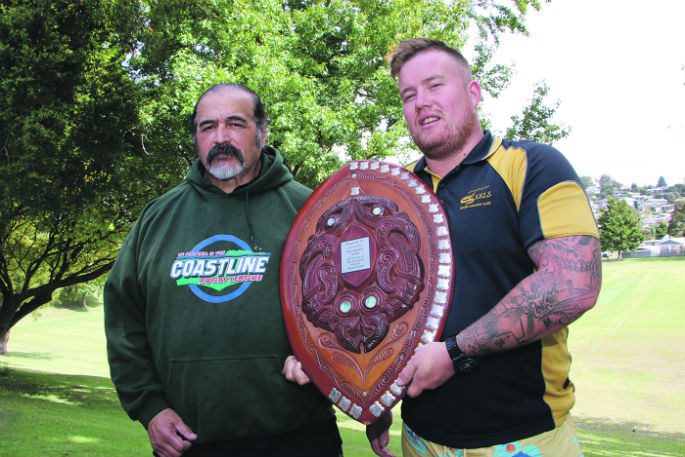 Got it and hanging onto it - Stan Nicholas and Eels club captain Daniel Holmes with the Werohia Shield.

After 11 straight defences, the Werohia Shield has been housed in the trophy cabinet at the Otumoetai Eels’ Mitchel Park fortress since 2008.

So isn’t it time the shield was dusted down and shipped off to a new home at the Papamoa Bulldogs’ headquarters, some 18 kilometres up the coast at Gordon Spratt Reserve?

As an officer of the league, he might be expected to be dispassionate. But as one of the founders of the Eels, his blood runs blue and gold.

That loyalty will be tested later this month when the Bulldogs play the Eels for the family-sponsored Werohia Shield – a rugby league pre-season tournament which has been running for 28 years.

It’ll be a lively workout for both teams, but perhaps more significantly, the game will bring two of district’s toughest, most ambitious and uncompromising coaches head-to-head – James “Jock” Nicholson of the Bulldogs and the Eels’ Grant Sunborn. History is clearly with Sunborn and the Eels.

“They both have a great following,” says Stan, which is great for the Werohia Shield and great for rugby league.

Once-upon-a-time, in the early 1990s, 24 clubs would compete for the shield over a whole weekend. But the game went into serious decline over the years, and while there are still eight clubs in the Coastline District Rugby League, most are focused on juniors.

“There were lots of factors,” explains Stan, “the main one being the demand that clubs have teams across many grades. Most just had senior teams and couldn’t muster the numbers required.”

But the games’ fathers here in Bay of Plenty believe the sport is being revitalised and grown.

“In fact, Coastline Rugby League has just ratified a ten year strategic plan,” says Stan, “and that’s something we have never done before.” The league has identified a number of growth areas to be tackled, such as administration, promotion in schools, promoting the right people to the right jobs and working with clubs in its catchment to promote the fact the code is still very much alive.

There are many school-age club teams. “We have to grow that popularity so they are still playing league when they reach the age and ability of senior league,” adds Stan.

The game appreciates rugby union is New Zealand’s national sport, and that the pull of the All Blacks jersey and big contracts is a huge attraction for young players.

However, 19,000 people packed Mount Smart Stadium to watch the Warriors win by 34 in their oinking NRL match against another pack of Bulldogs on Saturday evening. There’s clearly an appetite for the game.

“It’s getting that appetite nationwide,” says Stan. “But there are very positive signs for rugby league in the Bay of Plenty.”

The Otumoetai Eels will defend the Werohia Shield against the Papamoa Bulldogs at Mitchell Park in Brookfield at 3.30pm on Saturday, March 30. There will also be a round robin competition for reserve grade sides from 9am.