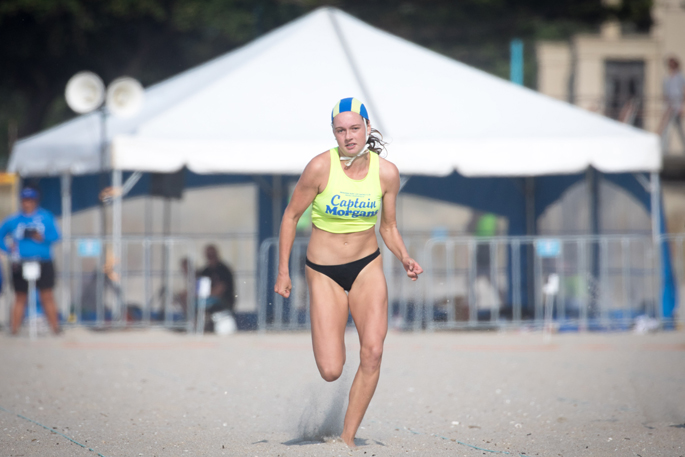 The 16-year-old claimed a clean sweep of all three beach women's sprint finals, backing up to win the under-16, under-19 and open crowns.

Luck was with her in the latter final, when teammate Jamie Gedye stumbled mere metres from the line, allowing clubmates Irving and Casie Fyall to sneak through, with Omanu's Sophie Sandford third.

However, Irving combined with Fyall, Gedye and Madeleine Wilson to win the open women's beach relay, completing a second treble for Irving.

Earlier, she's combined with Wilson, Christy Tate and Georgie Pitkethley to win the under-19 beach relay and joined Briana Ingoe, Genna Robertson and Jessie Kapene to take gold in the under-16 beach relay.

Seven Mapu also won the under-16 men's beach sprint and was second in the under-19 final to complete a dream afternoon for the Gisborne club, pushing them to the top of the overall points tally with 43, six ahead of defending champions Mount Maunganui.

Hawke's Bay's Ocean Beach Kiwi was the other dominant club in the sand, sweeping the three men's beach relay age divisions, adding the individual under-19 sprint crown through Wesley Akeripa.

Earlier, it was another Gisborne club that created history in the rescue arena, with Midway dominating.

Under-19 star Olivia Corrin and first-year open competitor Jess Blakeman kicked things off by winning the open women's tube rescue title, then backed it up with victory in the board rescue as well. It's the first time since Andrea and Tina Hewitt won the rescue double in 2002 that this feat has been achieved.

"I was really happy with Jess's paddle and we got a nice ride home," Corrin says. "There were some tricky conditions to read but we got a bit of luck and managed to hold on."

Not to be outdone, Cory Taylor and Matt Scott stepped up for the Midway males, winning both the open men's tube rescue and grabbing a wave near the cans to collect the board rescue as well.

That feat hasn't been achieved since New Plymouth Old Boys in 2010 - although Mount Maunganui's George Haynes was part of different winning combinations in 2014.

It's the first time one club has collected all four titles at the one nationals and created some personal history for Taylor; the first time he's won an open board title.

"Scotty had a bad side for the swim out but I got an opening in the board through a rip and just committed," Taylor says. "I could hear Olivia yelling at us as she was warming down and then a wave popped up and we slid down it. It feels incredible to do the double."

There was another notable double, appropriately in the double ski, with Mairangi Bay taking out both the open men's and women's races in heavy 1.5m surf.

Danielle McKenzie and Rachel Clarke won the women's race for the third year in a row - McKenzie's fourth in five years - while Travis Mitchell and Mike Lee won for the second year in a row but Mitchell taking his seventh overall.

Papamoa teenager Aiden Smith won his first open men's beach sprint, after falling in the under-19 final, heading home Mairangi Bay's Daniel Dyet - who was chasing his third title in a row - and Papamoa clubmate Kodi Harman who won four titles from 2011-2014.

The event began with a minute's silence for victims of the Christchurch terror attack.