From Tauranga and law, to rugby and Scotland 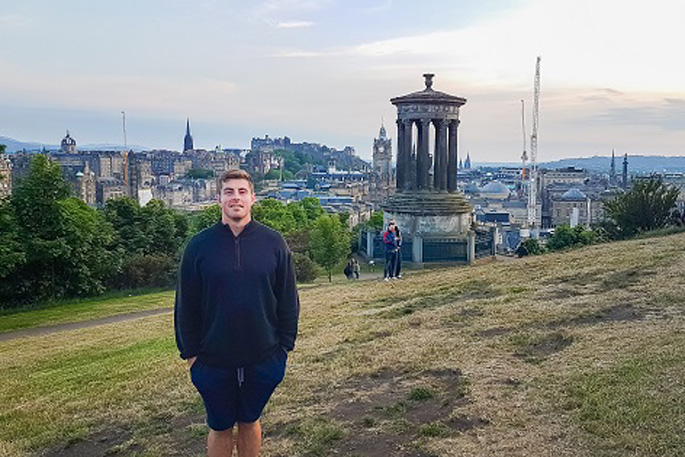 Mungo Mason is back in his homeland of Scotland while he pursues a professional rugby career. Image: Waikato University.

Tauranga’s Mungo Mason has traded textbooks for footy boots as he chases a professional rugby career in his homeland of Scotland.

Mungo completed the final semester of this Bachelor of Laws last year while on a student exchange in Chicago before heading off to win himself a spot with Edinburgh Rugby and Scotland Sevens.

With things going so well overseas Mungo has opted to graduate in absentia this month instead of coming home to a graduation ceremony with all the bells and whistles.

That decision might not go down too well with at least one member of Mungo’s extended family.

“My Zimbabwean grandmother was super keen to see me walk the graduation stage,” he says.

“It’s a bit gutting not to do the full-on graduation thing but I’m making the most of my time here in Scotland.”

Reflecting on the last four years at Waikato, Mungo admits that juggling full-time studies with a professional sports career had its challenges, but approaching each day with energy and enthusiasm proved to be a successful formula for him.

“You hear the clichés about students pulling all-nighters with Red Bull benders but if you are proactive and chip away you get the work done,” he says.

Born in Carluke, just outside Glasgow, Mungo moved to Tauranga with his family when he was two years old.

From an early age he asserted himself as a sporting force to be reckoned with, both in the water and on the rugby field. He represented New Zealand in under-20 water polo but it was excellence in rugby that gained the former Tauranga Boy’s College Head Boy and 1st XV Captain a Sir Edmund Hillary Scholarship to study at the University of Waikato’s Hamilton campus.

The Waikato Rugby Union helped the talented player settle into life outside the Bay of Plenty and further advanced his knowledge and love of the game.

Mungo made the most of university life by taking on roles as a Student Ambassador and volunteer sports mentor for the Waikato Academy of Young Achievers.

His leadership skills saw him selected to attend the 2016 University Scholar’s Leadership Symposium in Hanoi, Vietnam. Then there was the social initiative, Flatting for Change, he founded with two friends that made donating to charitable causes more affordable for students.

While the venture has been offline for a while, Mungo says the experience gave him a good understanding of the non-profit sector.

Crediting the Waikato LLB for improving his skills of negotiation and mediation, Mungo says public speaking has now become a particular strength. He did a couple of summer clerkships at Tauranga law firm Holland and Beckett and enjoyed learning the craft and the work that goes alongside it.

A highlight of Mungo’s was getting to finish off his studies at the Chicago-Kent College of Law, a well-regarded law school in the heart of Chicago’s CBD ‘Loop’.

Describing the sprawling city as one of the most interesting, culturally diverse and exciting he’s been to, the open-side flanker also enjoyed participating in the new professional competition ‘Major League Rugby’, playing for the San Diego Legion.

Mungo reckons there’s no better way to experience personal growth than going on an overseas exchange and reckons every university student should do it at least once.

“I was fortunate to do it twice,” he says. He’s keen to return to the United States one day so will likely study a Master of Laws to increase his work opportunities there.

Mungo envisages a career in the area of international development assisting progress in developing countries. Other future goals may include running his own business and, as a former Tauranga Youth MP, he hasn’t ruled out the idea of venturing into politics, but for now his immediate sights are set on rugby.

“What I studied doesn’t have to be specifically angled to practising law,” he says. “Being so widely applicable, it can act as a springboard to all sorts of careers.”

Whatever Mungo ends up doing, he’s guaranteed to aim high. Citing Mum and dad as his role models (mum Helen is CEO of the Bay of Plenty District Health Board Tauranga and dad Max is a Tauranga City Councillor), Mungo admits he’ll miss the post-graduation celebration the family had planned for him.

“We were going to share a bottle of bubbly over mum’s legendary strawberry mousse, followed by a stroll on the beach at the Mount. Hopefully we can still do that when I head home later in the year.”