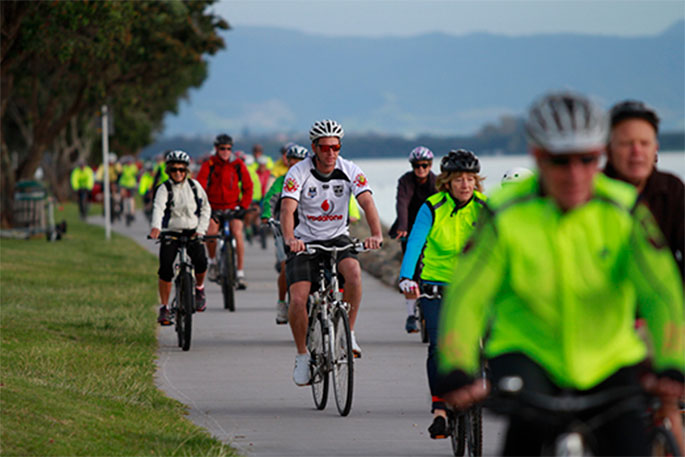 The tour will be coming through Tauranga in the next couple of days. File photo.

A Bike ride for Peace around the world, led by blind cyclist Tore Naerland, passes through New Zealand from March 19 -22 visiting Rotorua, Tauranga and Auckland.

The bike ride started in Norway last month and also passes through the UK, France, India, China, Australia and the United States before returning to Norway.

On the way the cyclists are meeting with governments, parliamentarians, mayors, religious leaders and others, as well as speaking at schools and public events.

“We cycle to raise attention to nuclear disarmament, oppose hate violence and war, protect the climate, promote cycling and renewable energies, ban plastic waste from being dumped in the ocean, promote full inclusion of disabled people in society and cut military spending in order to fund the sustainable development goals,” says Tore, who has been cycling for peace since 1977.

Diplomacy, nuclear-risk-reduction and climate protection are a key issues for the bike ride, in light of renewed nuclear arms races and heightened conflicts between nuclear-armed countries such as India and Pakistan, North Korea and the USA, and between Russia and NATO/Europe/USA.

“In January this year, the Bulletin of the Atomic Scientists set the hands of the Doomsday Clock to 2 Minutes to Midnight.

“We are calling on nuclear armed States to adopt no-first-use policies pledging never to launch a nuclear war, and to negotiate an agreement for the global, verified elimination of these weapons of mass destruction.”

In light of the Mosque shootings in Christchurch, the Bike Ride will also lay flowers in tribute at Rotorua and Tauranga mosques.

The ride is supported by three international peace organisations: Parliamentarians for Nuclear Non-proliferation and Disarmament (PNND), Mayors for Peace and the ATOM Project, and also in New Zealand by the Peace Foundation.

“I am delighted the Bike for Peace is coming to Tauranga,” says Jan Tinetti MP, List Member from Tauranga and PNND Executive Member.

“The team of cyclists are an inspiration as they circumnavigate the globe to promote peace. I hope many people can attend the public events to hear these important messages.”

The Peace Bike Ride calls for cuts in global military spending, which currently consumes US$1.7 trillion annually, and redirect this to fund global economic and social needs, such as the Sustainable Development Goals and climate protection.

“The UN Charter obliges governments to solve disputes peacefully and reduce military spending to fund development, but in many cases they are not doing this,” says Alyn Ware, PNND Global Coordinator and Peace Foundation International Representative who is cycling with the Peace Bike Ride from Rotorua to Tauranga.

“Parliamentarians, mayors and other members of civil society need to take action, including to speak up for peace, join peace and disarmament initiatives, end investments in weapons and fossil fuels, and shift these funds to sustainable development.”

The Bike Ride also demonstrates inclusion of disabled people in society including in action for a sustainable world.

“If a disabled person like myself can contribute to peace and the planet, then anyone can,” says Tore.

Bike For Peace and Tore Naerland have been awarded the Gandhi Foundation International Peace Award (2015) and the Norwegian Kings medal of honour (2017).

They have been nominated eight times for the Nobel Peace Prize.

Cycle from Kopurererua Valley (K Valley) into Tauranga CBD with the cyclists. Contact alyn@pnnd.org or phone 021 260 3727

Public event: 4:30pm-6pm. Our Place. 91 Willow St. All welcome to meet the cyclists and learn about the ride.

March 21: Events in Rotorua and Tauranga