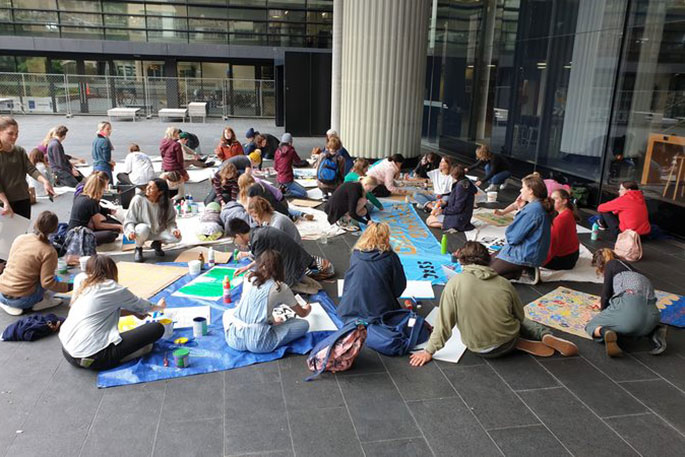 Tauranga students will join thousands of others around New Zealand in a protest against climate change today.

Students will be gathering in Red Square in Tauranga at 1pm.

“We have speakers from environment groups in Tauranga coming,” says Erin, one of the protest organisers.

“We also have Leo Murray, a waste management advocate and Liesel Carnie from Envirohub.”

The students want action to move the country off fossil fuels and on to renewable energy.

They accuse the government of not doing enough to stop global warming, and they are taking the day off school to show how worried they are about their future.

They have the support of the Climate Change Minister James Shaw, who met with students in Wellington on Monday.

James is due to meet the Wellington students when they arrive on the steps of Parliament.

While the strike has divided MPs, the Māori Climate Commissioner Donna Awatere Huata is among those who are supportive of students and says she will be marching with them today.

"These young people they're saying: 'This is our future'. We're talking an existential issue. We may not exist if we carry on like this," she says.

Not all schools have been supportive of the strike, and students have been threatened with detention for truancy by some principals.

Part of climate change is from industry creating new and unwanted products that people dont really need... and hours and hours of devellopment of new software to drive them. So, those children who protested, should immediately hand in any useless equipment such as computers, gameboy, Xbox, big screen TV’s skateboards etc and not replace them as they are all unnecessary and contribute to climate change. To me, the children are all contributing to climate change, so their protesting is protesting against themselves? Children (people under 18) are minors and not allowed to make informed decisions, because they dont have the capacity to think things through... which is obvious in this case. Someone (adults) are USING children for their own agenda. I bet these children will be looking forward to the next protest now, so they can take another day off school. Dangerous precedent now set.

An endearing trait of youth is naivety where truth is pure and simple. However to quote Oscar Wilde " the truth is rarely pure and never simple" They and we are all part of an expanding consumer population who demand more of all resources. Our electronics built in Asia where coal power plants belch out more co2 a hundred a year built to supply all the imports we demand. We the consumers export the pollution for our goods create to poorer countries and workforces. However these countries also growing more consumers...the world population will go from 7 plus billion to nearer 10 billion in the next 25 to 30 years. Do you think these consumers will stop wanting ? Anyway march down the street and feel good for now for soon your children will say why can’t I have it all and why not right now.

Not a single bike helmet in sight, so guess they all walked to Red Square.