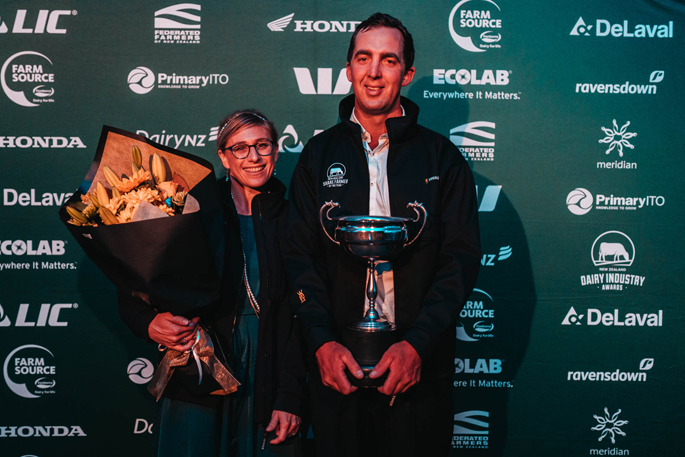 The major winners in the 2019 Bay of Plenty Dairy Industry Awards, Matt Barr and Genna Maxwell believe one of the strengths of their business lies in being fourth-generation custodians of a family legacy, with opportunities for diversification.

The couple were announced winners of the region’s Share Farmer of the Year competition at the Bay of Plenty Dairy Industry Awards annual awards dinner held at the TECT – The Action Centre in Pongakawa.

Matt and Genna, are Lease Farmers for Viv Barr, on her 110ha, 410-cow Awakeri property.

“Viv is an actively supportive land owner,” they say.

“Losing dad in 2014 was one of the toughest things we’ve had to live through,” says Matt.

“Mum and I were thrown in the deep end to fill dad’s boots and steer the farming operation.

“Although it was heartbreakingly tough, we learnt so much and had huge support from our rural community to get where we are today.”

Matt holds a Diploma of Farm Management from Lincoln University and Genna a Bachelor of Law from University of Otago. While Matt has entered the awards programme previously, this is the first year they have entered as a couple.

“Genna works off-farm as a lawyer and works on-farm in her spare time. Entering as a couple made sense as it was another great way for Genna to integrate her skill-set into the business and gain a wider understanding of the farm business operation,” says Matt.

The couple won $9,050 in prizes and three merit awards.

Matt and Genna, both aged 31, enjoy the outdoors, working with animals and the diversity each day brings.

Matt and Genna realise the importance of balancing work with life and are active members of the Edgecumbe Squash Club.

“Because I work off-farm, I enjoy being on the farm in my spare time,” says Genna. Other interests include crossfit and playing the guitar.

The couple say another strength of their business is the cost control of feed through ‘in-house production’ and full control of young stock.

Their goal for the future is to fulfil their vision of a sustainable, diverse business and a balanced life.

Runners-up in the Bay of Plenty Share Farmer of the Year competition were Jeremy and Melissa Shove, who won $4,387 in prizes and four merit awards.

Previously a commercial fisherman in the Southern Ocean, Jeremy made the career change to the dairy industry seven years ago, with Melissa still working part-time as a sports massage therapist while looking after the HR and financial side of the partnership.

“At certain times of the year, dairy farming allows you to have an awesome work-life balance, and especially with having our two children now, it’s awesome to be able to get away from the farm and go hunting, fishing and even camping in the summer,” says Jeremy.

The couple say one of their challenges they have overcome is managing and organising staff.

“We have learnt a lot and now have good systems in place using our Human Resources tool kit and utilising technology,” says Melissa.

The winner of the 2019 Bay of Plenty Dairy Manager of the Year competition came from a farming background in India and became eligible to enter the awards this year because of the visa criteria changes.

The 26-year-old holds a Diploma in Applied Technology from the Wairakai Institute of Technology and Primary ITO National Certificates in Agriculture Level 4 and 5.

“I am a technology enthusiast, and I would like to contribute to the dairy industry through farm-related technologies and innovation,” says Janamjot.

After overcoming the challenges that are associated with moving to a new country, Janamjot is proud to have improved his understanding of dairy farming in New Zealand and his English-speaking skills.

Janamjot believes the ability to feed cows properly in tough conditions is a strength of the business.

“We are capable of feeding them on the feed-pad,” he says.  “More than 50% of the farm has low-lying paddocks that get flooded in heavy rain fall.  In such conditions or even in a dry summer, our cows are fully fed.”

Joseph Braybrook, aged 22 years, was second in the Dairy Manager competition, winning $2,400 in prizes and one merit award. Joseph was runner-up in the 2018 Bay of Plenty Dairy Trainee category.

“Through my experience with the Dairy Trainee category, I have realised areas I needed to work on,” he says.  “The contacts and people I have met through entering the Awards have been fantastic.”

Joseph is Farm Manager for Henry by-de-ley on his 135ha Paengaroa property, milking 400 cows.  He sees his good eye for pasture management as the key to a great business.

“I strive for perfection in everything I do.  Not every day’s a good day, but there always something good in every day.”

“I am the third generation to work on this farm, following on from my Grandfather Graeme Weld, and father Gerard,” she says.  “Dad and I work closely together and we both understand where we want the farm to be and work together toward our goals.”

Off-farm Ashley is kept busy with soccer, coaching and playing at a national level.  She is also a national age group selector and plays for the WAIBOP women’s team and is the Director of Football for Te Puke United FC.

“Entering the Awards has enabled me to test my knowledge and understand my strengths and weaknesses and work on them,” he explains. “I have proven to myself that I am more capable and confident than I believed.”

“I chose farming as a career because I wanted to do something that had a diverse range of work and provides a lot of opportunities to progress,” says Alex.  “I was diagnosed with ADHD when I was young, and dairy farming has allowed me the chance to prove myself.”

The 21-year-old is Assistant Manager for Peter Overdevest and Tania Akehurst on their 390-cow, 132ha property at Galatea.

Alex is proud of his successes in the Dairy Industry Awards so far and of completing Level 3 Primary ITO courses.

Future farming goals include moving to a Farm Manager position on a large-scale dairy unit in the 20/21 season.

“I love being able to work outdoors and with such amazing animals.  The cows really do become your ‘beast’ friends!”

“I’m really pleased I entered the Awards again,” says Justin.  “Last year I gained a merit award and I’m proud of myself for working hard in order to progress through the industry and achieve my goals.”

“A Dairy Trainee entrant stands out from the crowd when applying for jobs, you get to identify areas that may require improvement and make new friends within the industry.”

The Bay of Plenty Dairy Industry Awards winners field day will be held on April 08 at 1286 State Highway 30, Awakeri where Share Farmers of the Year, Matt Barr and Genna Maxwell lease.

Also presenting at the field day will be the region’s Dairy Manager of the Year, Bridie Janamjot Singh Ghuman and Dairy Trainee of the Year, Alex Sainty. Further details on the winners and the field day can be found at www.dairyindustryawards.co.nz.