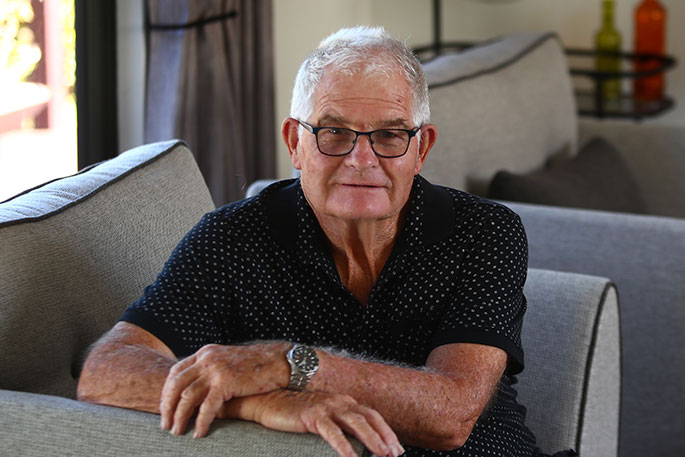 Brian Elmes talks about the difference the new device has made. Photo: John Borren.

“I could have gone out and water-blasted the drive,” says Brian Elmes of his first decent Johnny Cash in a more than a year. For Johnny Cash, read slash, read piddle.

The Bethlehem man can joke about it now, but until he became a guinea pig for groundbreaking prostate research right here in Tauranga - research that could turn a trickle into a torrent for older men worldwide - piddling was as difficult and uncomfortable as it was irregular and frustrating.

“I would be up for 15 to 20 minutes in the middle of the night trying to go,” says Brian. “You do a wee bit and think ‘marvelous’. But it was generally a wasted exercise. Broken sleep and no piddle.”

It is one of the most common conditions associated with ageing in men.

But now, because of a small spring like device inserted in Brian’s urethra, a visit to the porcelain pot has gone from a few drops to a deluge. No more staring frustratingly and forlornly into the undisturbed waters of the pan. “It’s quite a different flow,” he says. “Very satisfying.”

Benign prostatic hyperplasia (BPH), or prostate enlargement, is a urinary outflow obstruction. Symptoms may include trouble with starting to urinate, a weak stream, inability to urinate or loss of bladder control.

It’s been Brian’s unfortunate experience for a year, and it got pretty bad pretty quickly. He has plenty of ‘want to piddle but can’t’ type stories.

“I was driving a truck from Tauranga to Masterton and I needed a piddle. I had to go,” he explains. So he pulled over, and on the blind side of the truck he tried to deal with his ‘screaming urge’.

He stopped his truck a further three times over the space of half-an-hour, but experienced a trickle here, and a few drops there. Eventually, Brian gets to Masterton and the floodgates open, normal service resumes.

He goes again in the afternoon with no problems. “Then all of a sudden I want to go and I can’t,” he says. “It’s not painful, just uncomfortable and damned frustrating.” Normal service is suspended once again. That’s the nature of the beast.

Men, and particularly ageing men everywhere, can relate. If we are bursting and go to the toilet, the sensation is sublime. “Not for me,” says Brian. “Comfort stops were anything but.”

Then the rollercoaster started. There were hospital flow tests for Brian, there were ultra-sounds, and a pre-op. He was going to have corrective surgery.

Without warning, he was then bumped off the list. “Flip!” Hopeful then deflated. But would he be interested in a new trial procedure, one of the first in the world and led from right here in Tauranga?

“Anything!” came the cry from Brian. “I didn’t mind being a guinea pig. I was interested in anything that might fix the problem.” Anything to be able to pee on demand.

It’s called the Zenflow spring system, and looks like a tiny wire art installation which, when implanted, helps relieve the pressure of the enlargement on the urethra restricting the urinary flow. So far, 30 stents have been implanted in the trial and another 40 to 50 patients are due.

“I walked down to the operating theatre at nine o’clock one morning, came to at 10.30 and was on my way home at 12.30pm” He does recall, with great satisfaction, the first post-procedure piddle. It was that afternoon he declared he could have ‘water-blasted the driveway’.

“There was a bit of a burning sensation,” he says, “which was kind of to be expected. But it was nowhere near as bad as putting up with the discomfort and frustration of not being able to go.”

The Zenflow is described as a non-invasive, non-surgical option – medications can have side-effects, as can surgery, but this does not. It could even become a clinic rather than a hospital procedure, performed under light sedation rather than anaesthetic.

However, Brian tells a tale that would make most men’s eyes water. “A wand is inserted through your penis to check your bladder and to see if you fit this bill and fit that bill,” he explains. “It’s all done under local anaesthetic.

“The device is inserted through the penis and into the urethra. They put you under for that. You don’t know a thing, you don’t feel a thing, and afterwards you don’t know it is there except your bodily functions have changed and it’s doing a wonderful job.”

The research is a continuation of the innovative work at the Bay of Plenty Clinical Trials Unit, led by internationally-renowned urologist Professor Peter Gilling. The work is timely considering the ageing population.

At the end of the 24-month study, men like Brian will have the choice of having it removed or not, depending on their experience. He will be sticking with it.

“Professor Gilling has done me a great favour, and I am indebted to him,” says Brian, who is also selling the idea to others.

The study runs for two years and FDA – Food and Drug Administration – approval in the United States will take a further year, so it could be late 2020, early 2021 before it is market ready. After that, any urologist could perform the procedure anywhere in the world.

Two minutes after meeting Brian Elmes we are talking no piddle, trickle piddles and great gushing piddles. He’s quite happy to share the intimate working details of his waterworks if it means other men can benefit from simple, groundbreaking medical research being done right here in the Bay of Plenty.