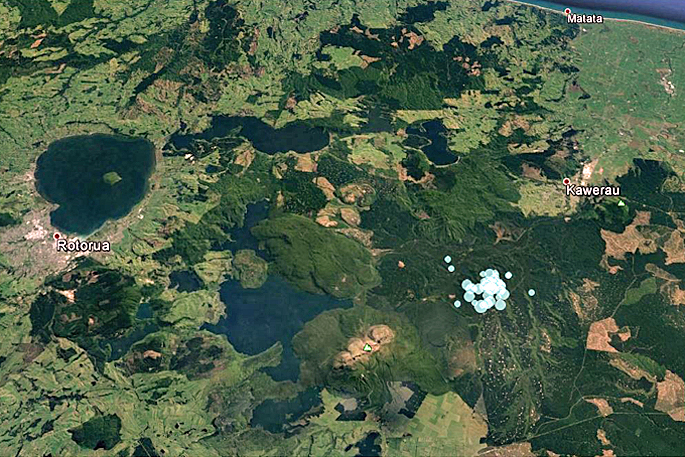 173 people have felt one of the larger earthquakes in the Bay of Plenty this morning. Image: GeoNet.

A weak-to-light shaking earthquake was reported ‘felt’ by 173 people, following one of the larger earthquakes to occur in the Bay of Plenty this morning.

According to GeoNet, they began registering an earthquake swam at around 5am with earthquakes still occurring.

At 11am, GeoNet says they have located 46 earthquakes in the location south-west of Kawerau, although more have occurred that are too small to be reliably located.

“The swarm earthquakes range in magnitude from 1.2 to 3.7 and all occur in the upper 20km of the crust, with some events being in the upper 5km.”

Swam activity like this is typical in the Taupo Volcanic Zone, and this swarm is akin to previous swarms in the greater Rotorua-Kawerau area.

“While this swarm is occurring in an area of active volcanism, the characteristics of its earthquakes are similar to those of a tectonic swarm, leading us to hypothesise that the swarm is not volcanically-driven,” says GNS science duty seismologist Sam Taylor-Offord.

Often earthquake activity in the Taupo Volcanic Zone occurs as short-lived clusters that are known as ‘swarms’.

They are very common in the Rotorua-Taupo area and larger swarms have lasted weeks-to-months and have included many hundreds of earthquakes.