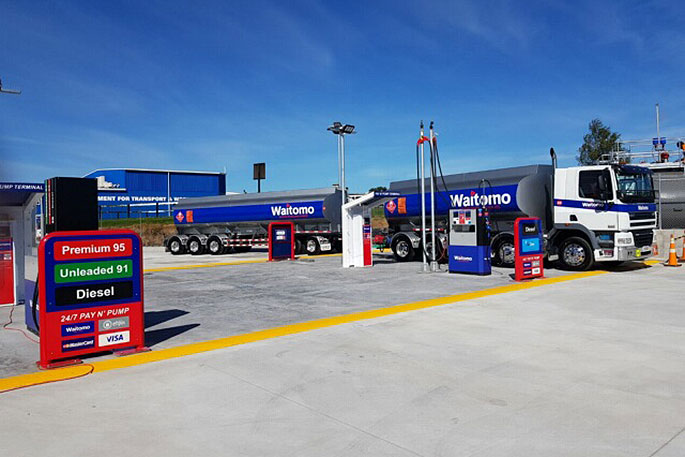 The recently opened site in Rotorua. Now Papamoa has one of its own.

“Where there’s Kiwis who want top performance, a fairer price for their fuel, delivered by great people, Waitomo will be there.

“It’s the same formula our 100 per cent family-owned and operated business has operated on for the last 70 years to fuel Kiwi success.”

Waitomo also operates a Fuel Stop in Mount Maunganui, and has recently opened a site in Rotorua.

Further Waitomo Fuel Stops in Wellington, Upper Hutt and Christchurch will open later this year, delivering long-awaited price competition and choice to motorists paying some of the highest fuel prices in New Zealand.

“For a family-owned, Kiwi business, we’re sure creating some big waves around the country with our Waitomo price. That’s how we like it.

“Our success is built on Kiwi support. Wherever we expand, the response has been amazing and we’re committed to returning the favour to our customers with our everyday low Waitomo price.”

The Papamoa Fuel Stop will officially open at 12pm, with ice creams and cold drinks to keep things cool.

As with all new Waitomo Fuel Stops, the pumps on site are fitted with vapour recovery technology, a system not widely used in New Zealand that sucks petrol vapour that would otherwise escape into the atmosphere back into the pump.

Established in Te Kuiti more than 70 years ago by Desmond Ormsby, Waitomo Group now has 60 sites stretching from Paihia to Foxton.

There was a hiccup there this afternoon and was not able to purchase fuel, i minor glitch on a AWESOME COMPANY, never mind it will be fixed soon i say and will go back out and get some ,the BEST PRICE in Tga, $1.27 for diesol. thankyou Sunlive, 10-4 out. phew.