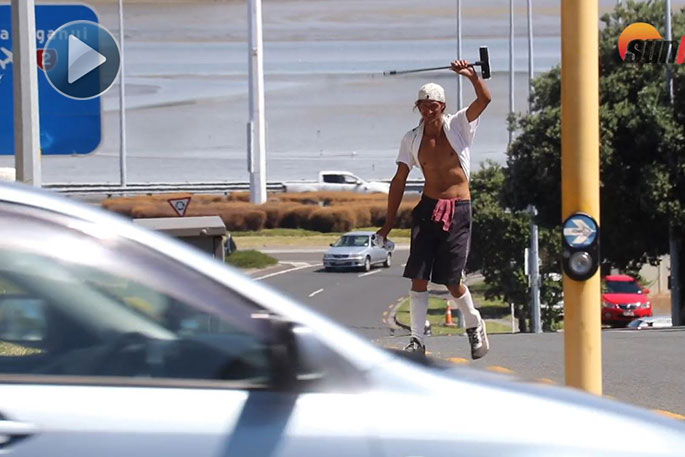 Tauranga man Shane Taki says he is washing car windscreens daily to earn enough money so he can eat.

Shane has had to find a way to make some extra money "without involving crime".

“I do car window washing at the lights. I’m on the streets, I’m just hungry with no food, no clothes.

“I’m on the benefit but all of it goes out and leaves me with like $40 left. That does nothing, so I’d rather work and do window washing, than stealing and burglaries for stuff.

“I’ve done this for about a month now, I started out with nothing.”

Shane says police have been warning him for window washing as it is an illegal practice.

“It’s been alright, it’s just the police that are the only ones that stop me. They just tell me to go away, but I don’t listen to it to be honest. I just carry on.”

Shane has been told that window washing at traffic lights is against the law. And he has been fined for his actions.

“But I’ll tell them they can fine me up, I’ll just carry on grabbing fines cause it aint gonna stop me.

“When I do this I make enough for food and that, I’m not starving, it lasts me over a couple of days.

“The police are getting on to me now, they’re starting to come over and stop me now.

“At 2 o clock today, I’ll be pulled over about two or three times.” 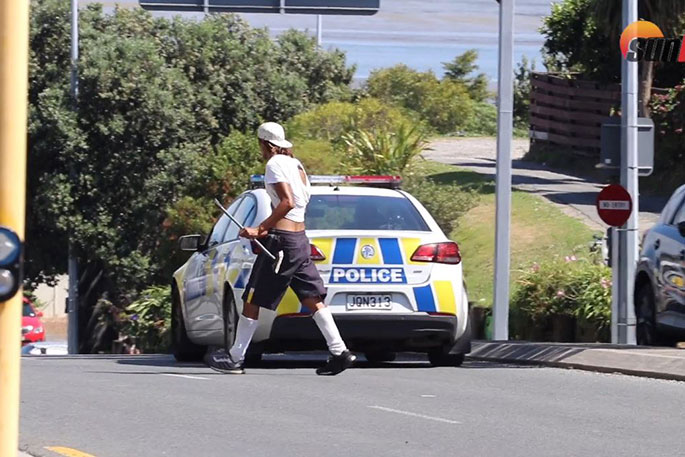 Tauranga police have been receiving many calls during the day about window washers at intersections throughout the CBD.

In August 2017, an amendment to the Land Transport Act introduced an infringement offence relating to window washing on roads.

“This enables an infringement notice to be issued to pedestrians who wash or offer to wash a vehicle or part of a vehicle on a road, unless the vehicle is parked,” says a police spokesperson. 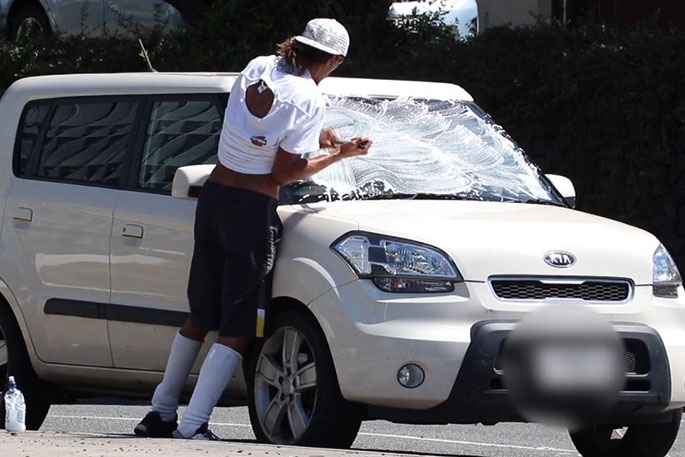 instead of breaking the law at intersections . . .

. . . maybe a better use of his time would be to offer to clean the window fronts for the shop keepers in the area.

was in prison with this guy 13 years ago. think youd rather him washing your windows then breaking them and stealing. looks like hes at least trying these days intimidating? no he harmless enough work? sure.. you gonna pick him up everyday and take him? hard to get to an orchard in the middle of nowhere to pick fruit without a car and licence

If he is wonting a job there will be heaps of Kiwifruit jobs coming up soon. Better yet work hard during the season say at a packhouse in winter and work with Avos in summer, I know I have done it. What about fruit picking in the hawks bay? they have staff shortages at the moment. There is work out there people just don’t wont to work hard for it or chase it. Hay good on him for getting out there. But there are other ways. If he shows this much dedication to window washing there must be someone out there to give him a job and keep out of trouble.

The self-entitlement to break the law

is astounding. He KNOWS he’s breaking the law, yet continues to do so? How did society go so wrong?

What he is doing is against the law, probably not paying tax what is equal on stealing from taxpayers. Get rid of them,

Their are literally thousands of jobs up for grabs in the horticulture industry in the BOP at present. I see no reason why anyone who is obviously physically fit and able should not be working in a proper job. Benefit should be reviewed or revoked if he doesn’t take a job that is offered. Window washers are not socially acceptable, they are simply acrobatic beggars !!

Surely in NZ there is another option for this man? Surely someone can offer him a part time or full time job, or is it a case of him simply not wanting to get a legal job? There are lots and lots of reasons why window washing is not legal. Show him sympathy - yes. Give him a job - yes. Don’t give him money.

Looking at that top photo - I would feel intimidated if he approached my car! The fines will just keep on mounting - no worries for the likes of him - never be paid! Needs to be locked up!

Remember why they were banned?! Don’t let them back in for a second

I hope he is paying tax on those earnings or it’s not fair.