Should turtles be the new ferrets? 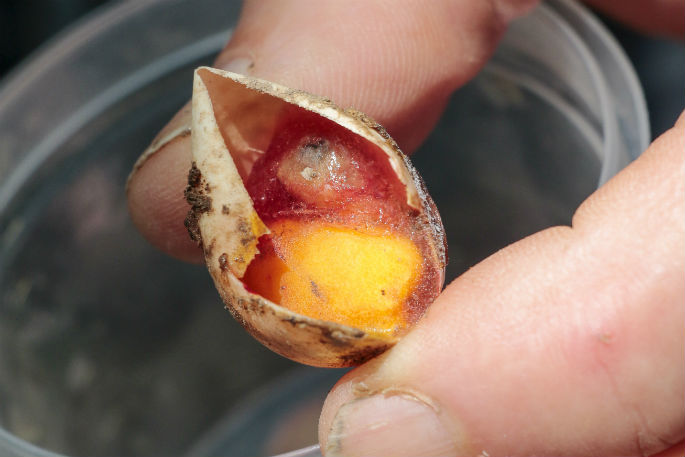 One of the turtle embryos discovered in a Tauranga reserve

Should there be a ban on the sale of turtles in New Zealand?

This is the question that has been raised after a nest of exotic red-eared slider turtles was opened and examined on the banks of a waterway in Tauranga’s Carmichael Reserve last week.

Basil Graeme, a conservationist who is one of the team monitoring the nest, believes the sale of turtles in New Zealand should be forbidden.

“It’s not a big deal banning the sale of an animal,” says Basil. “We’ve done it before with ferrets. We had people keeping ferrets as pets and we had people breeding them and selling them as pets.”

He says the straw that broke the camel’s back came when someone walked their pet ferret on Great Barrier Island, which has absolutely no mustelids on it.

“I mean how stupid can you get?” he asks. The island is largely a nature reserve and free of some of the more problematic pests that plague the ecosystem elsewhere in the country.

New regulations are ultimately intended to make all ferrets extinct in New Zealand. Owners can keep a ferret they currently own, but it’s illegal for ferrets to be bought, sold or bred.

“There would be a lot of push back from people who like turtles and obviously from those who breed and sell them.”

He suggests the problem is one of responsible ownership. “When you buy them as juveniles, they’re a pretty colour and cute and very easy to keep in domestic aquaria.”

Fast-forward two years, however, and they have outgrown the aquarium, they’re not so cute and there’s not a great commercial market for adult turtles. So the question is, what do you do with them?

That’s answered by the fact that Auckland is on the brink of a serious infestation of red-eared sliders. There are also increasing numbers in Northland waterways, and now they are in Tauranga’s water courses.

“This incident is probably not irresponsibility but ignorance,” says Dr Ling. “People don’t realise the potential harm these things can do in the wild.

“People aren’t necessarily being willfully bad, and they want to do the right thing by the animal.” So much so that they release it into the wild.

It’s listed as one of the world’s 100 worst invasive species, and given its omnivorous diet, could adversely impact aquatic plants, insects, eels, small fish species and ground-nesting birds.

“It’s an exotic pet that we need to take a serious look at,” says Dr Ling. And he is. The biologist is currently researching red-eared sliders living in the wild in New Zealand - research which will help us better understand the pest in the Bay of Plenty.

Conservationist Ann Graeme was also there when the Carmichael Reserve nest was being excavated. “Do we wait until they are a menace or a really bad pest, eating ducklings and fish?” she asks. “Do we wait until this problem is right out of control, or do we do something now? That would seem to be a very sensible idea.”

She suggests “grandparenting” could be a way forward, achieved by banning the breeding and selling of turtles and letting the current population run its course. “The existing population would be enough to satisfy all turtle lovers in New Zealand.”

Dr Ling says the red-eared slider is not the only exotic pest being found in the wild. “Last year there was a report of an Australian water dragon, a dragon lizard, in the wild down near Levin, which they managed to recapture.”

New Zealand’s climate is much cooler that the Americas where the red-eared slider is native to. Bay of Plenty Regional Council bio-security officer, Donna Watchman, says this has worked as a natural control to stop unwanted pests such as the turtles from reproducing in the wild.

“However, if the warmer weather means eggs can survive until hatching, it could potentially change how these pests will need to be managed in the future,” admits Donna.