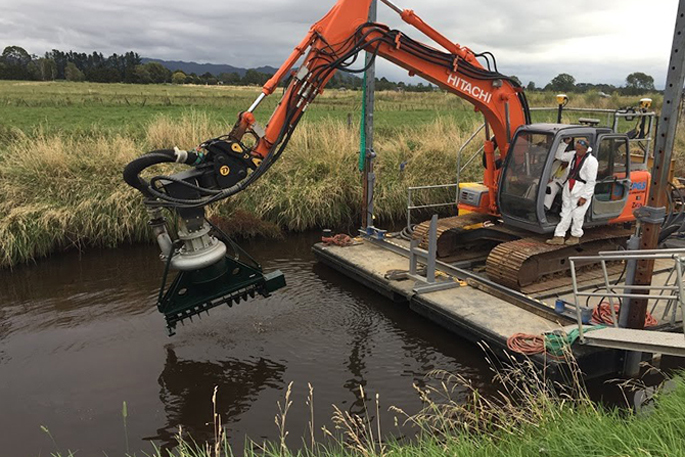 Cutter-suction dredge at work along the canal. Supplied photo.

Another significant milestone has been achieved for the Kopeopeo Canal Remediation Project as dredging of the Canal resumes and water treatment works move to the second containment site at the Whakatane River end of the Kopeopeo Canal.

Deputy Project Manager Ken Tarboton says that moving to the new containment site off Keepa Road represented the progress made by the project to date.

“More than half of the 5km length of the canal to be cleaned by the project had now been completed.

“Last week, dredging got underway again pumping the dredged sediments to the second site, CS3. The contractor, EnvrioWaste Services Limited, has commissioned an improved dredge head, and is currently making fine adjustments during the next week while they ramp up to full speed.

“It is a good time to look up and appreciate what has been achieved to date. It can be easy to get caught up in the day-to-day nuts and bolts of such a big project so the visibility of the move to the new site is a good reason to acknowledge the 2.8km of canal that has had the dioxin-contaminated sediment removed and the canal will be healthier and better for the next generation,” says Ken.

In stages, the project will remove and safely store up to 40,000m3 of sediment from the canal using the cutter-section dredge and Geotube containment methodology.

Following dredging the contained sediment will be treated using bioremediation. The canal was contaminated between the 1950s and late 1980s as a result of stormwater discharges from a former sawmill, which treated timber using Pentachlorophenol.

Pedestrian and bicycle-only access to the Whakatane River stopbank will remain for the health and safety of the public throughout the duration of the project.

“This is a working operation dealing with contaminated material and we ask that people walking dogs or accessing the river to fish and so on stick to the marked access paths for their own safety,” says Ken.

Access through the site will remain restricted for the duration of the dredging phase of the project and during some of the site works and bioremediation towards the end of the year.

Contractors have been asked to be particularly aware of pedestrians and cyclists at the site entrance off Keepa Road, and the public is asked to be cautious around the Keepa Road bridge as there is increased contractor traffic to the site.

The community continues to be involved in the project through the Community Liaison Group and activities such as last year’s well-attended public open day. Businesses near the new work site recently received a letter providing an update and letting them know site operating hours and contract details in case of any issues.

An independent monitor also keeps a close watch over the project, reporting back to the community with regular updates and feedback.

“Dredging has been slower than anticipated as the focus has continued to be safe removal and transfer of the contaminated material to the containment sites. We expect dredging to continue until around the middle of the year,” says Ken.

“If people have any questions for the team they are welcome to get in touch, or come along to the next CLG meeting on Tuesday February 26 which is open to the public.”