Cyclone Oma is NOT coming to NZ, says WeatherWatch 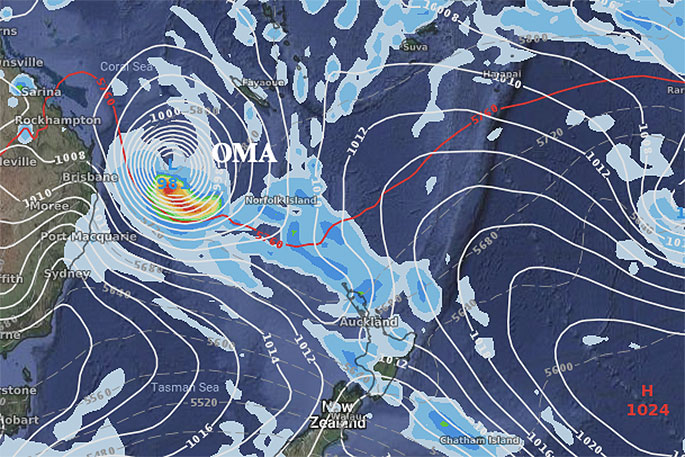 Cyclone Oma is not coming to New Zealand, despite some news headlines still saying otherwise.

Latest data suggests Oma is now trapped in the Coral Sea well away from New Zealand and will likely remain there for a week.

While today the cyclone is somewhat connected to the humid, cloudy, drizzly weather in the north the storm itself is not coming any closer and, in fact, will move back north further away from NZ this weekend and not influence our weather at all, says WeatherWatch.co.nz

"While earlier in the week there was a time when there was a 50/50 chance Oma might come our way, that short window closed back on Tuesday, now the trusted forecast guidance is in agreement that Oma is stuck in the Coral Sea area for a week."

So if Oma isn't coming, why is there severe weather in New Zealand this Sunday?

NZ has a big southerly change on Sunday which will work with a deepening new low east of the country around the Chatham Islands.

At the same time the large high in the Tasman Sea (which is protecting NZ from Oma) will help make those southerly winds stronger and colder.

"We have some sub-tropical areas of rain mixed in too tonight and early Saturday - so all combined we may see some pockets of severe weather but still many areas will just have "the usual" unsettled conditions."

Another Cyclone on the horizon?

As Oma looks set to remain up around Queensland there is new life developing east of Fiji next week.

While Fiji itself isn't currently in any firing line or risk for a storm the next tropical cyclone may well form east of Fiji (simply as a reference point on a map) around the middle of next week.

As for New Zealand, high pressure returns to NZ next week which means any tropical storms should stay well north in the tropics.

"Our forecast, generally speaking, is for drier than average weather to continue next week once the southerly has gone by the end of Monday as the following high pressure system looks very solid." 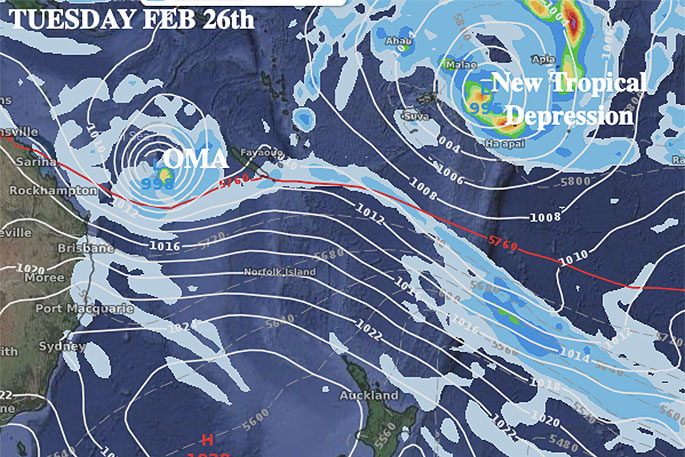 Oma will likely remain in the Coral Sea area for another week but will likely lose its cyclone status at some point and become a tropical depression as it very slowly weakens.

It still looks likely to unravel over Queensland sometime late next week - pushing further away from NZ, not closer.

Originally it had one chance to move to NZ earlier this past week, that brief moment has truly gone now that high pressure over Tasmania is moving in faster and this is going to reverse Oma's track back northwards in the days ahead. 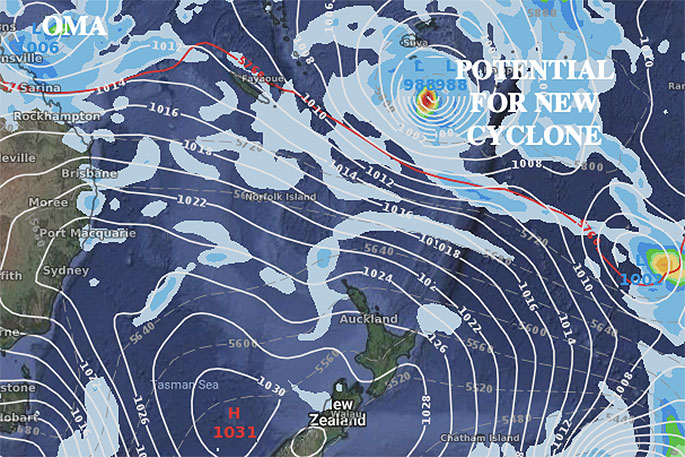 ONE WEEK FROM NOW (Next Friday March 1)